The accident happened despite a public outcry in September over the death of a techie, Subhasri Ravi, in Chennai who was run over by a truck

Anuradha Rajeswari on her way to office when the accident happened

A 30-year-old woman who was riding a scooter was hit by a truck on Monday morning after she tried to avoid a falling flagpole of the AIADMK on a highway in Tamil Nadu's Coimbatore. Anuradha Rajeswari, who was riding the scooter, suffered serious fractures on both her legs after the heavy vehicle's front right wheel ran over them, the police said. She has been admitted to the intensive care unit of a local hospital. The police said the truck driver was speeding.

Ms Rajeswari, a business administration graduate, was on her way to office when the accident happened. She is the only child in her family. Her relatives say she provided for both her parents.

The same truck had also hit another man who was riding a motorcycle. He suffered injuries on his hand and knee.

The accident happened despite a public outcry in September over the death of a techie in Chennai who was run over by a truck after a hoarding put up by a local leader of the ruling AIADMK fell on her.

Ms Rajeswari's family alleged the AIADMK hoarding was put up on Avinasi Highway to welcome Chief Minister E Palaniswami, who was in Coimbatore on Monday. "The police are covering it up," the woman's uncle Sivan told NDTV. 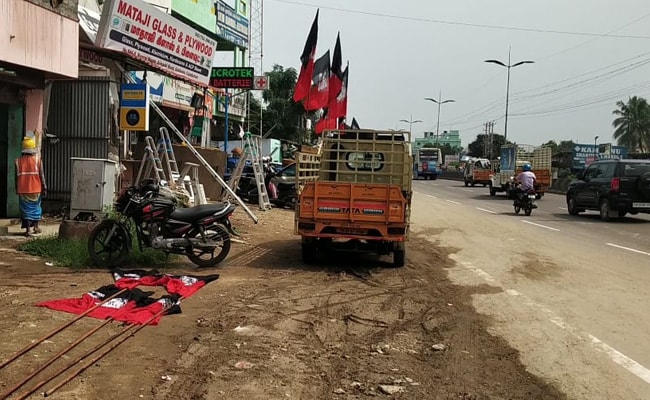 The Madras High Court has said no political hoardings are allowed on roads due to safety concerns. The Tamil Nadu government had approached the court before Prime Minister Narendra Modi met with Chinese President Xi Jinping at the picturesque coastal heritage site Mamallapuram, seeking permission for putting up hoardings at more than 40 designated locations to welcome the leaders. Though the court directed then to comply with norms, the government had refrained from putting up banners or hoardings on the highway.

"The driver has confessed that he was speeding as his owner had asked him to come fast. The flagpoles were erected on the sandy side of the road. There is no way they could have reached the right lane of the highway. We have filed a case only against the truck driver," a senior police officer who asked not to be named told NDTV.

The woman's uncle disagreed with the police version. "The flagpole fell and that's why Anu turned right to the other lane in panic and got hit by the truck," Sivan said.

"The Coimbatore Corporation had allowed AIADMK flagpoles for a wedding. We are checking if the permission violated court order. Investigation is on into what led to the accident. There is no complaint yet alleging the flagpoles caused the accident. The AIADMK flags were not put up for the chief minister's visit," Coimbatore Police Commissioner Sumit Sharan said.

Mr Palaniswami said the court hasn't said anything on not putting up flagpoles, adding the accident hasn't yet "come to my knowledge".

The accident in Coimbatore happened on the same day when a court gave bail to a local AIADMK leader, Jeyagopal, in Chennai, who allegedly put up the hoarding that led to the accident in September that killed software professional Subhasri Ravi. 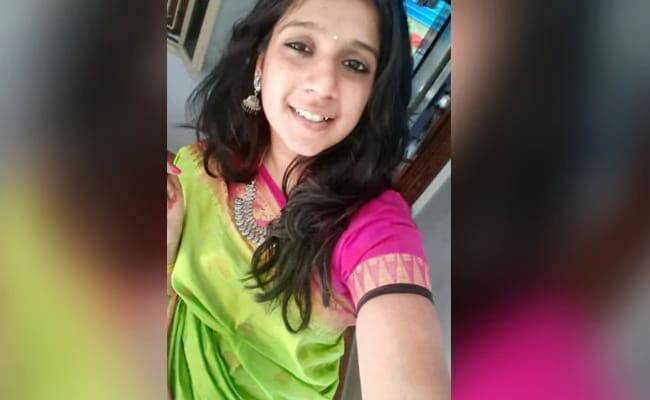 In that case too, the police initially filed a case of rash driving against the truck driver. A case was later filed against the AIADMK leader after a public outcry.

Slamming officials for not stopping "killer" hoardings and banners from being installed on the road, the Madras High Court had said, "How many more litres of blood would be shed before the state took action over illegal hoardings?"

In 2017, another software professional, Raghupathy, was killed in Coimbatore after hitting an arch raised across the highway by the ruling AIADMK.

"The police says they gave permission for flagpoles, something the High Court has banned. What action has been taken against these police and corporation officials? The court has given a lot of leeway and it's time the court exercises contempt of court power and put these people in jail. Till then, nothing will change. They have to come down heavily on the senior officials of the government," said Jayaraman Venkatesan, convenor of Arappor Iyakkam, a group that campaigns against corruption.

The opposition DMK's chief MK Stalin criticised the AIADMK for negligence. "Another young woman died due to AIADMK cadre's publicity obsession. There are allegations that police are covering up. When will this publicity obsession end?" Mr Stalin said.

A bizarre comment made by a senior AIADMK leader last month did not help much. "The person who kept the banner did not push her to death. If any case has to be filed, if anyone has to be booked, it's the wind," AIADMK leader C Ponnaiyan said.

Arvind Kejriwal To Launch Schools In Tamil Nadu On September 5