Techie Dies After He Hit Political Hoarding, 'Who Killed Ragu' Is Viral

Ragupathy Kandasamy, 30, a software engineer, was to return to the US over the weekend; anger spilled over on social media and hours after the accident, someone painted "Who Killed Ragu?" at the accident spot

Chennai: Ragupathy Kandasamy, a 30-year-old software engineer back home in Tamil Nadu's Coimbatore from the US to meet a prospective bride, died on Friday last when his motorcycle crashed into a temporary wooden hoarding set up on a road by the ruling AIADMK for its MGR centenary celebrations. As Mr Ragupathy hit the structure and fell from his bike, a truck ran him over.

The young engineer, who was to return to the US over the weekend, was not wearing a helmet, the police said. He planned to park his bike at a bus stand and take a bus to a temple.

Anger spilled over on social media and hours after the accident, someone painted "Who Killed Ragu?" in large, white lettering at the spot where Mr Ragupathy was killed.

A local legislator, Krishnan K, from the main opposition party DMK has filed a petition in the high court asking judges to order the removal of all hoardings in Coimbatore and wants action against government officials. He has also demanded that Mr Ragupathy's family be given compensation.

Another opposition party, PMK, has demanded that a case be filed against Chief Minister E Palaniswami. 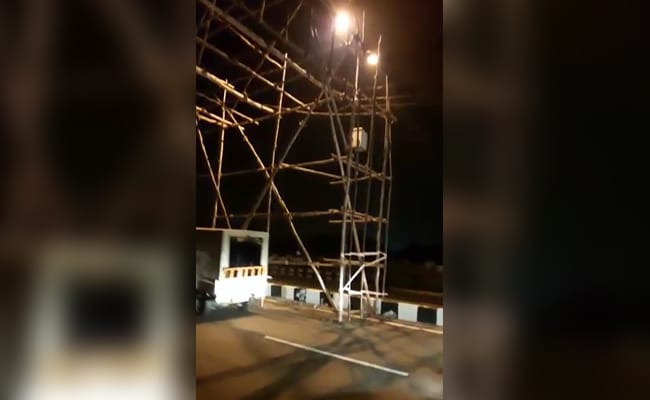 The young engineer, who was to return to the US over the weekend, was not wearing a helmet, police said

"Any government that regards power and fame even at the cost of life will fall. A government that doesn't respect pedestrians won't go too long on palankeen. Banner 'Jis' should realise those who pave way for accidents abet murder," tweeted actor Kamal Haasan, also blaming the Chief Minister. Mr Haasan has been sharply critical of the state government and recently discussed his plans to enter politics with fans.

The structure that Mr Ragupathy crashed into took up space on both sides and police investigators said he was thrown off his bike when it hit a portion that jutted well on to the road. Activists have alleged that the hoarding on Coimbatore's Avinashi road covered about 30 per cent of motorable area.

Promoted
Listen to the latest songs, only on JioSaavn.com
On Saturday, the Commissioner of the Coimbatore Corporation ordered the removal of hoardings, which had no permission, calling them illegal.

The state government and the AIADMK are celebrating the 100th birth anniversary of the party's founder and former chief minister MG Ramachandran or MGR on October 3.