Tamil Nadu Bus Strike: Transport workers are demanding salaries on par with drivers in other state government corporations. The unions want a 2.57 per cent hike, but the government has agreed for a 2.44 per cent raise

Tamil Nadu bus strike has taken over 14,000 buses off the roads across the state. (AFP)

Chennai: Commuters in Tamil Nadu are stranded, forced to pay through the nose to autorickshaw and cab drivers or walk long distances as around 14,000 buses have remained off the road for the third consecutive day after transport workers' unions went on strike demanding a pay hike. Thousands of passengers yesterday waited at bus stands as only a third of the buses operated in Chennai and other areas in the state.

Twelve workers' unions decided to strike after talks with the state transport minister did not result in any breakthrough, they said. The Madras High Court has asked the workers to call off their strike and report for duty or face consequences that will include suspension and dismissal. The trade unions, however, say they will discontinue their strike after they see the High Court order.

As over two crore commuters who use the bus services across Tamil Nadu are suffering on account of the strike, the transport department has roped in temporary drivers to resume services.

"The striking drivers aren't wrong, but the government should resolve the issue in an amicable way," a commuter from Puducherry said. 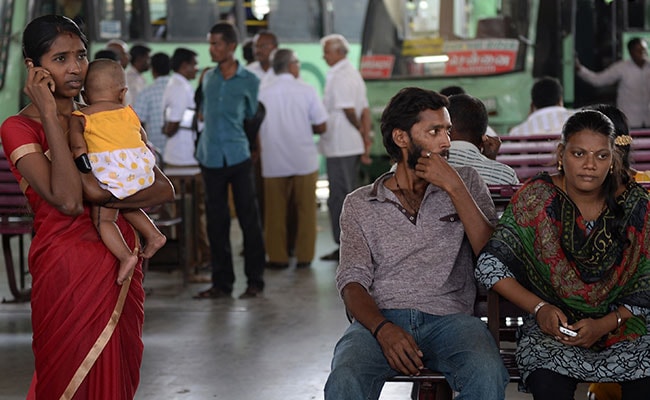 Over 2 crore commuters use the bus services across Tamil Nadu.

Smitha, a dentist, was stuck at the Thiruvanmiyur bus depot as she couldn't get a bus to Kilpauk. "The government should not have allowed the situation to escalate. It's affecting people. The autorickshaw drivers are overcharging and everyone can't afford a cab. Also, not all places are connected by local trains," she complained.

At the T Nagar bus stand, S Krishnaveni, a cook, is late for work. She said, "I work at three homes and I won't make any money today as I won't be able to make it on time. I can't afford to hire an autorickshaw."

P Tamilvanan, a research scholar from Puducherry, said, "The state government is only aiming to crush trade unions. They don't want to address the issue."

Transport Minister M R Vijaya Baskar has appealed to workers to return for work but has ruled out revision. He said, "Other departments have pay revision only once in ten years unlike transport workers whose pay is revised every three years."

There are about 1.4 lakh workers in the state's transport department to handle a fleet of 22,500 buses. Transport workers are demanding salaries on par with drivers in other state government corporations. The unions want a 2.57 per cent hike, but the government has agreed for a 2.44 per cent raise.

Promoted
Listen to the latest songs, only on JioSaavn.com
Transport Minister MR Vijayabhaskar has called the strike politically motivated, but the unions demand the government to be fair to them.

A Soundararajan, a Centre of Indian Trade Union leader, had told NDTV, "We don't want to subject the public to hardship but the government is pushing us. It doesn't want to treat us equally as drivers in other departments."