Sources within Team Rajini have said that is unclear if the meeting will be in-person or conducted online, in order to maintain social distancing during the Covid pandemic 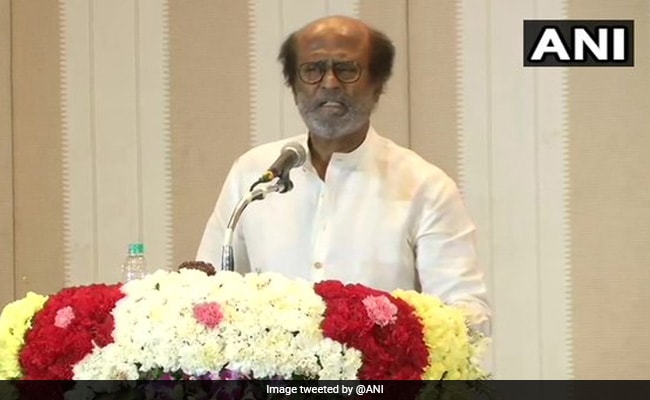 Superstar Rajinikanth, who earlier this month was urged by supporters to rethink his decision to stay away from electoral politics, will meet the district secretaries of his party - Rajini Makkal Mandram - on Monday to confirm if he will, in fact, contest in next year's Assembly polls.

Sources within Team Rajini have said that is unclear if the meeting will be in-person or conducted online, in order to maintain social distancing during the Covid pandemic.

Last month the actor hinted that his long-awaited entry to electoral politics may be delayed. A letter attributed to him cited doctors' concern over campaigning during the pandemic and the potential impact on Rajinikanth's health. The letter seemed to indicate the actor had been advised to restrict travel since he has a kidney condition and could be vulnerable to the COVID-19 virus.

The 69-year-old actor later said the letter was "not mine but the doctor's advice is true".

"I shall discuss with Rajini Makkal Mandram and shall announce my political stand at an appropriate time," the actor, who has weighed in on various political issues over the past two years but has delayed his formal plunge, added.

One such was put up by "Vellore Citizens Wishing for a Change" and urged him "to take the path of a lion to hunt down blood sucking pack of wolves and convocation of eagles".

Another by a fan - VM Jeya Srinivasan - read: "It's a grand beginning of people's rule."

Suspense over Rajinikanth's electoral debut comes just months before the Tamil Nadu Assembly election; it will be the first since the death of the state's two most powerful politicians - J Jayalalithaa of the AIADMK and MK Karunanidhi, leaving a power vacuum to be filled.

Earlier last year, actor-politician and Kamal Haasan (who heads the Makkal Needhi Maiam) and Rajinikanth had expressed a willingness to work together, if needed, for the welfare of Tamil Nadu, raising the tantalising prospect of a superstar alliance.

Last week the ruling AIADMK said - during Home Minister Amit Shah's visit - that it would continue its alliance with the BJP, which has a negligible presence in the state and has been courting Rajinikanth for a long time.

However, a meeting between Mr Shah and Rajinikanth did not happen.

The actor's supposed hold on the people is legendary; many believe his 1996 comment - "even God can't save Tamil Nadu if Jayalalithaa wins" - led to her defeat.

The BJP has made no secret of its desire for more prominence in southern states - the unleashing of A-listers like UP Chief Minister Yogi Adityanath and Home Minister Amit Shah for next month's Hyderabad municipal election is an example of that.

Tamil Nadu is expected to vote for a new government in March, when Chief Minister Edappadi K Palaniswami will hope to lead the AIADMK to a third consecutive term.

The opposition, led by the DMK's MK Stalin, will hope to repeat the hugely impressive clean sweep that his party (allied with the Congress) achieved in last year's Lok Sabha polls.