P Balakrishna Reddy submitted his resignation to chief minister K Palaniswami who forwarded it to Governor Banwarilal Purohit who has accepted it. 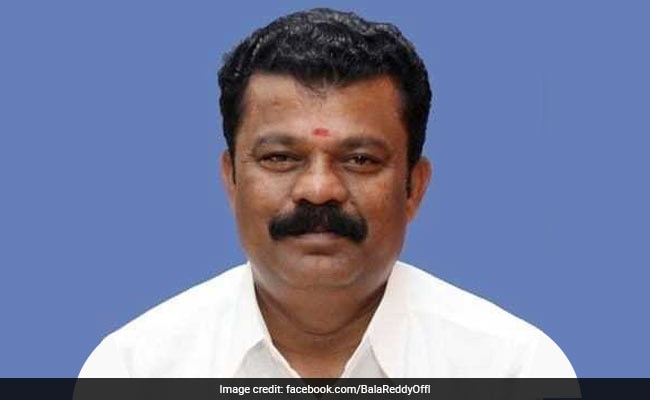 Hours after he was sentenced to three years rigorous imprisonment by a special court in Chennai in a two-decades old riot case, Tamil Nadu minister P Balakrishna Reddy Monday resigned from the K Palaniswami-cabinet.

The case related to a protest against illicit liquor at Hosur in 1998.

P Balakrishna Reddy submitted his resignation to chief minister K Palaniswami who forwarded it to Governor Banwarilal Purohit who has accepted it.

His portfolio of Youth Welfare and Sports Development has been handed over to School Education minister KA Sengottaiyan.

"..Governor of Tamil Nadu has accepted the resignation of P Balakrishna Reddy, from the Council of Ministers," a Raj Bhavan release said Monday night.

In a jolt to the AIADMK government, a special court Monday sentenced Reddy to three years rigorous imprisonment in a two-decades old riot case related to a protest against illicit liquor in Hosur.

Reddy, then a Bharatiya Janata Party (BJP) member, was convicted by a special judge in the case related to the protest staged on September 30, 1998.

The judge, however, accepted a plea of the minister's counsel and stayed the sentence enabling him to file an appeal in the Madras High Court.

Opposition Dravida Munnetra Kazhagam (DMK) president MK Stalin demanded Reddy's dismissal from the ministry, describing his conviction as a as a "shame" for the ruling AIADMK led by Chief Minister K Palaniswami.

Besides Reddy, who represents Hosur constituency in the assembly, the court sentenced 14 other accused in the case to three years rigorous imprisonment.

First accused Govinda Reddy, who had led the demonstration organised by the Krishnagiri unit of BJP, was sentenced to five years imprisonment.

All the accused, including the minister, were present in the court.

Speaking to reporters later, the minister said he would file an appeal in the high court on Tuesday.

"In 1998, over 30 people died after consuming spurious liquor. Following that a road blockade was held and the case was filed in connection with that," he said.

Reddy faces disqualification as a lawmaker in view of the conviction unless it is stayed by a higher court.

Under Section 8(3) of the RPA, a person convicted of any offence and sentenced to imprisonment for not less than two years shall be disqualified for that period and a further six years after release.

According to the prosecution, during the demonstration held by the locals in Hosur in Krishnagiri district, about 300 km from Chennai, the protesters allegedly went on the rampage and clashed with police, damaging several vehicles.

Three policemen were grievously injured, five buses were destroyed in stone pelting and a police vehicle and a bike were burnt in the violence.

Subsequently, a complaint was registered against 108 people, including Reddy, for various Indian Penal Code offences including rioting and wrongful restraint and under the Tamil Nadu Public Property (Prevention of Damage and Loss) Act.

During the pendency of the trial, as many as 27 accused died.

Reddy, who was arraigned as the 72nd accused, had later joined the All India Anna Dravida Munnetra Kazhagam (AIADMK).

He was elected from the Hosur assembly constituency in the 2016 elections.

The trial, proceeding in a local court, was transferred to the special court set up in September last year following a Supreme Court order to expedite cases against elected representatives.

In its first conviction, the special court had on December 28 held former DMK MLA guilty in a rape case and sentenced him to ten years rigorous imprisonment.