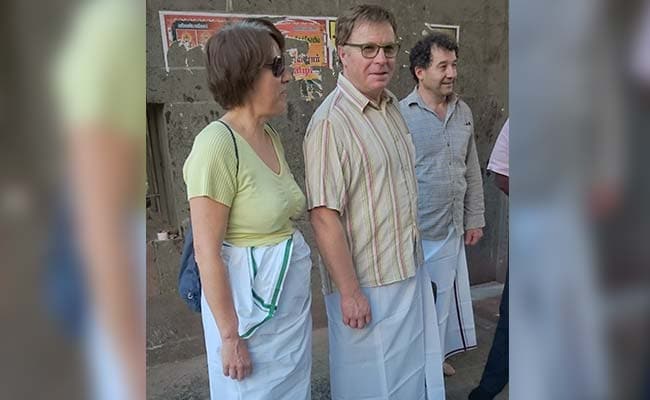 Foreigners visting a temple in Chennai last week with dhotis wrapped over their jeans.

Chennai: A ban on temple visitors in Tamil Nadu wearing jeans, skirts and shorts has been suspended by the Madras High Court till January 18.

The dress code had been imposed from January 1 by the Madurai Bench of the Madras High Court high court in an order last November, while disposing a petition seeking permission for a cultural festival. The Tamil Nadu government had challenged the November order, last week. The earlier order, by a single judge has been stayed by a division bench.The court order had prescribed pyjamas, pants or dhotis with shirts for men and saris, churidar suits with shawls or stoles for women visiting temples. T-shirts, skirts, leggings, shorts or lungis are not allowed.

In its appeal, the state government said the court's order was not in consonance with the existing Tamil Nadu Temple Entry Authorisation Act, 1947 which permits each temple to frame its own dress code according to local customs.