Chennai: J Jayalalithaa, the Chief Minister of Tamil Nadu and one of India's most powerful and popular politicians, died late on Monday in a Chennai hospital, nearly three months after she was admitted there. She was 68.

Ms Jayalalithaa had a cardiac arrest on Sunday evening and was rushed back to the Intensive Care Unit or ICU. Barely two weeks ago, after doctors and her party said she was fully recovered from a respiratory illness, she had been moved from the critical care unit to a private room kitted out with emergency equipment.

"It is with indescribable grief, we announce the sad demise of our esteemed honourable chief minister of Tamil Nadu at 11:30 pm (local time) today (December 5)," Chennai's Apollo Hospital said in a statement released to the media after midnight.

Prime Minister Narendra Modi tweeted, "Deeply saddened at the passing away of Selvi Jayalalithaa. Her demise has left a huge void in Indian politics. My thoughts and prayers are with the people of Tamil Nadu in this hour of grief. May the Almighty grant them the strength to bear this irreparable loss with courage and fortitude," adding, "Jayalalithaa ji's connect with citizens, concern for welfare of the poor, the women and marginalized will always be a source of inspiration."

Ms Jayalalithaa was taken to Apollo Hospital on September 22 where she was admitted for dehydration and fever. Her condition soon deteriorated, and she was diagnosed with a severe respiratory infection. Specialists from Delhi's AIIMS hospital and a pulmonary expert from London were flown in for consults.

On November 20, in the clearest sign that they believed she was no longer in danger, doctors said Ms Jayalalithaa had been relocated from the Intensive Care Unit. They also said she was speaking occasionally and was alert. Her party had throughout maintained that she was directing important decisions from hospital including on a water dispute with neighbouring Karnataka.

For the centre and her own government, an over-riding concern apart from her health was the drafting of a contingency plan to prevent riots if her health deteriorated. Known as "Amma" or "mother" to lakhs of supporters, Ms Jayalalithaa's incredible popularity was often exhibited through dramatic fans prone to self-harm and violent attacks on public property when things went against her. Earlier on Monday evening, when local channels wrongly declared her dead at about 6 pm, a brief riot erupted outside Apollo Hospital, receding only when officials declared she was still alive.

The scenes that unfolded after her arrest in 2014 in a case of corruption included hundreds of supporters shaving their heads, a ritual associated with mourning. Outside jail, women stood wailing and clutching their heads and beating their chests. From within prison, the Chief Minister appealed for calm and restraint after people set buses on fire in anger. More than 200 people committed suicide to protest her imprisonment, according to her party at the time.

In 2014, she was convicted for misusing an earlier term in office in the 1990s to accumulate cash and property that could not be accounted for with her declared income - she had claimed her salary at that time was a token one rupee. Her trial took place in neighbouring Karnataka, where the case, filed by rival party, the DMK, had been moved to ensure it was not influenced by her power. Nine months later, she was acquitted and she returned triumphant to her home state to be reinstated as Chief Minster. 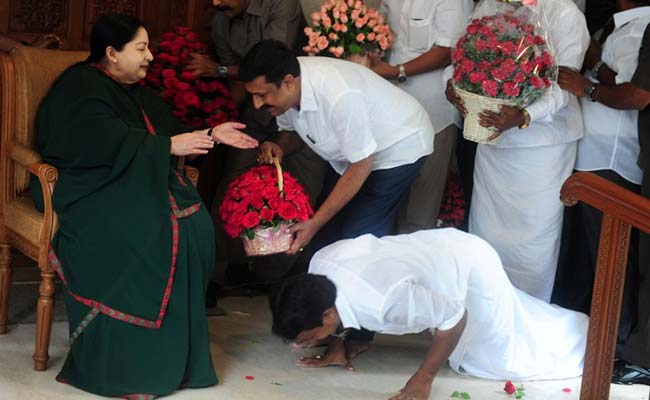 Members of her party, the AIADMK, prostrating in front of Jayalalithaa.

As she took oath in May 2015 wearing a green sari - she believed it was her lucky colour - other ministers who took their oath prostrated themselves before her on stage - a sign not uncommon in her party.

Ms Jayalalithaa, a former movie star, served four times as Chief Minister, alternating in office with her arch-rival, M Karunanidhi, who heads the DMK. But earlier this year, she broke that pattern with a decisive win - for the first time in over three decades, an incumbent Chief Minister was re-elected, a tribute to her hold over Tamil Nadu.

Demonstrations of sycophancy were not just tolerated but encouraged by her, said Ms Jayalalithaa's critics. She was also controversial for off-the-charts extravagance and lavish spending on her homes and, controversially, the wedding of her foster son, whose aunt, Sasikala Natarajan, lived with her and was also tried for graft.

After acting in more than 100 films, Ms Jayalalithaa rose to political leadership with the backing of MG Ramachandran, her co-star who founded the AIADMK. After his death, she became its chief in 1988.

In a state where the two main political parties have for years used vast freebies to endear themselves to voters, Ms Jayalalithaa dialled up the paradigm drastically in recent years through a slew of giveaways that included laptops and food processors and a series of offerings named after her: subsidized meals including Rs 1 idlis at the incredibly popular Amma canteens and discounted Amma-branded mineral water, salt, seeds and even medicines.

Promoted
Listen to the latest songs, only on JioSaavn.com
Press release issued by Apollo Hospital informing of J Jayalalithaa's death.