Jallikattu: Protests Over, We Got What We Wanted, Says Marina Beach Students To NDTV

Jallikattu has been brought back through an ordinance, but protesters demand a 'permanent solution'.

Chennai: After a morning of violence and arson at Chennai's Marina Beach, the students who rallied a week-long sit-in there in support of Jallikattu, the bull-taming sport, said that they have ended their campaign.

One of the main spokespersons of the movement, Raghava Lawrence, a famous movie producer and choreographer, told NDTV that "Whoever is still sitting there is not a part of our movement." He said "It's time for us to celebrate our success." 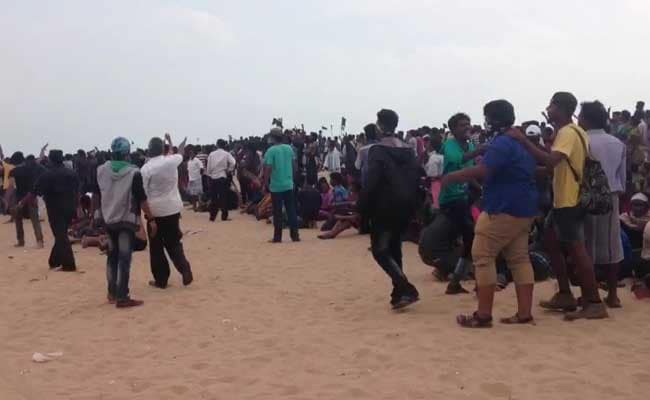 Many A-listers today appealed to protesters on social media to go home and end the protests peacefully.

The decision to end the protests at the shoreline was in keeping with the counsel offered on social media and elsewhere by celebrities like Balaji, a Radio Jockey, and superstar Kamal Haasan, who stressed that students must not risk the goodwill and gains of the last week by abandoning their commitment to a peaceful protest.

Promoted
Listen to the latest songs, only on JioSaavn.com
Activated by the large demonstration -15,000 on some days at Marina Beach with satellite protests in other cities- the Tamil Nadu government has introduced an executive order permitting Jallikattu, which was banned in 2014 by the Supreme Court. This evening, law-makers will examine how to ensure that bulls and the harvest-festival sport are exempted from rules that forbid Jallikattu as part of the law that protects animals from cruelty. Minute details of the protests, which began with a small group and swelled into a mass movement of up to 15,000 people, were shared on social media to garner more support. (file)

The students first arrived at Marina Beach last Tuesday, then made nimble use of social media to enlist thousands of supporters, who were in agreement that their camp must be an apolitical zone with the sole focus remaining firmly pinned to over-turning the ban on Jallikattu. Through the week, they cleaned the area of litter, ensured attendees had food and water, and performed songs and speeches that portrayed the bull-taming sport as a ritual of vast significance in Tamil Nadu culture that has been vilified as abusive to animals. While many agreed to leave after police notified the protesters of the eviction order, some resisted leading to lathi-charge and tear gas shelling from police.

This morning, the police asked them to leave the beach, pointing out that the area is needed to prep for Republic Day while stressing that law-makers are now moving to rescind the ban on Jallikattu.  Students resisted. Some were lathi-charged. The police says outsiders who were not part of the movement then arrived to set police cars on fire and hurl stones at cops.

Animal rights groups like PETA say bulls are tortured, their tails often broken, as young men try to mount them in an open field to see who can hold onto the hump for longer than three jumps or buckings by the animal. The A-listers who have come out in support of Jallikattu say any incidents of cruelty are deviations and not the norm.