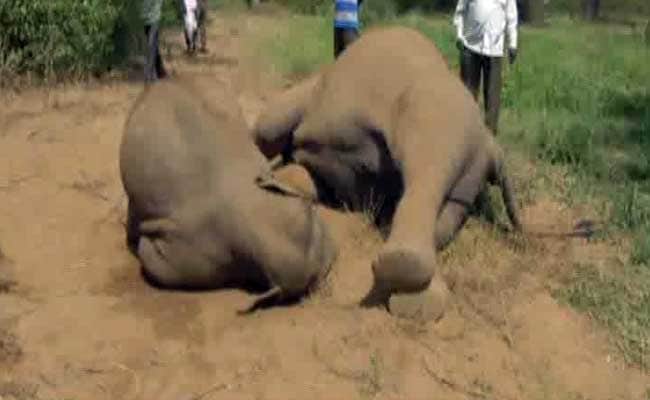 Elephant deaths due to illegal electric fences are treated on par with poaching.

Chennai: A 10-year-old elephant died trying to save her calf which was caught in an electric fence in Tamil Nadu's Vellore district this morning. Both mother and child were electrocuted.

The Assistant Conservator of Forests, Mohammad Raffi  in Vellore said, "High voltage electricity on an illegal electric fence put up by a private farm is responsible for this. This technically comes under the Krishnagiri Forest Division.  We have informed our colleagues there. They will investigate."

No arrests have been made yet. Investigators are looking for the man who had taken the land on lease.

A few days ago, a herd of three elephants including the two that were found dead today was seen roaming in the area and local people had complained of crop damage.

While solar electric fences with very low power supply to emit just pulses that keep animals away, officials say the fence that killed the elephants this morning was connected to high voltage power.

Sampath, President of the Velakkal Natham Panchayat, said, "(The) authorities should ensure this does not repeat."

Elephant deaths due to illegal electric fences are treated on par with poaching.  Officials say it appeared the calf got stuck in the live fence first. The mother tried to lift it and got electrocuted.

In January 2012, the Madras High Court had directed the state environment and forests department to remove illegally erected solar and electric fences in the elephant corridors. An appeal against the order was dismissed by the Supreme Court. But, farmers continue to put up illegal fencing.

In Tamil Nadu electric fences kill more elephants than poachers. The elephant is a protected animal under wildlife laws and included in other species like the tiger and lion in Schedule I of the Wildlife Protection Act.