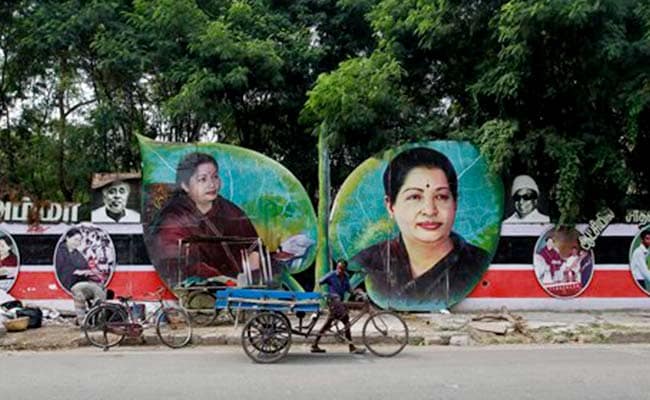 O Panneerselvam and VK Sasikala factions are fighting over the AIADMK poll symbol.

NEW DELHI: The two AIADMK camps led by O Panneerselvam and VK Sasikala on Wednesday lost the chance to use the party's "two leaves" symbol and the party's abbreviated name, during the prestigious by election for the RK Nagar seat that fell vacant after the death of former chief minister J Jayalalithaa. The Election Commission has ordered that neither of the two factions can use the "two leaves" poll symbol or the party's abbreviated name, AIADMK in the election scheduled for April 12.

The two parties have been given time till tomorrow morning to choose a new symbol for the by polls and tweak the party name.

AIADMK Deputy General Secretary TTV Dinakaran said he was surprised but would nevertheless win the election and get the poll symbol back. Former Tamil Nadu chief minister O Panneerselvam, who leads the rival faction, called the poll panel's decision "shocking and disappointing" despite submitting "strong evidence".

The commission's order came at the end of a six-hour long marathon hearing on Wednesday. The three-member panel headed by Chief Election Commissioner Nasim Zaidi said they did not want to rush to a conclusion that might be "erroneous".

"No one would grudge the fact that it is almost humanly impossible to study all the aforesaid records running into more than 20,000 pages (submitted just a day earlier)," the commission said, adding that it also had to analyse the arguments presented by the two sides to "come to a definite finding or conclusion".

O Panneerselvam, or OPS, the trusted lieutenant of the former chief minister had taken charge of the state after the party matriarch's death in December but was, according to him, forced to quit by VK Sasikala, who was later convicted by the Supreme Court to four years in jail in a two-decade old disproportionate assets case where Jayalalithaa was also an accused. Before she went to a Bengaluru jail, Sasikala, however, appointed nephew TTV Dinakaran as the party's deputy chief and her proxy, E Palaniswamy, as chief minister.

She continues to be the party chief as there is no provision to bar a convict from heading a political party. The law only restricts the convict from contesting elections within six years after completing the jail term.

Her camp has named Mr Dinakaran as its candidate from RK Nagar seat, pitted against OPS camp's heavyweight E Madhusudanan. Also in the fray for the seat is another claimant for Jayalalithaa legacy, niece Deepa Jayakumar.

Together with his handful of supporters, OPS had last tried to dislodge chief minister but Palaniswami sailed through the trust vote with ease, a point that the Sasikala-Dinakaran camp has made before the Election Commission to demonstrate that it represents the real AIADMK. It has also contended that it had overwhelming support in the party's top body, the General Council and Executive Council.
Comments
AIADMKElection commissiontwo leaves symbolAll India Anna Dravida Munnetra KazhagamO PanneerselvamVK SasikalaSasikalaTTV Dinakaran