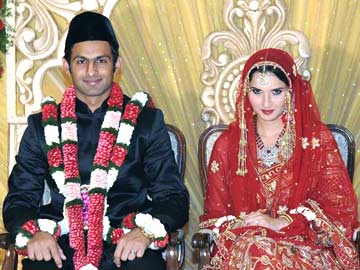 Hyderabad: Tennis star Sania Mirza is "Pakistan's daughter-in-law" and has incorrectly been designated the brand ambassador of India's youngest state, professed a BJP leader from Telangana, inciting strong reactions from other parties and activists.  ('She is a Symbol of Pride for India': Reactions on BJP Leader's Remark on Sania Mirza)

K Laxman, a BJP state legislator, says that the credentials of Ms Mirza, 27, as the poster-child for Telangana are questionable on two fronts- he says she is married to Pakistani cricketer Shoaib Malik and is not local enough. Mr Laxman says she was born in Maharashtra and her family moved later to Hyderabad.  (Sania Mirza Appointed Brand Ambassador of Telangana)

But sources close to Ms Mirza told NDTV that her family has lived in Hyderabad, the capital of Telangana, since 1908 when her great-grandfather moved there.

The ruling TRS, headed by K Chandrasekhara Rao, defended its decision on Ms Mirza. "This is foolish talk. We don't care what anyone says. She is an international achiever-" said the party's Keshava Rao.   K Kavitha, a parliamentarian and the chief minister's daughter, pointed out that Gujarat, the home state of Prime Minister Narendra Modi, has Bollywood mega-icon Amitabh Bachchan as its brand ambassador, even though he is not from the state.

While announcing on Monday that she would serve as its brand ambassador, the Telangana Chief Minister had described Ms Mirza as "the daughter of Hyderabad" and sanctioned a crore for her coaching and training.

Promoted
Listen to the latest songs, only on JioSaavn.com
She had tweeted, "Honoured and humbled to be the first brand ambassador for the state of Telangana :) #blessed.

Let's get Telangana on the world map together..thank u for the trust honourable CM sir..I am humbled 😊