MK Stalin, 68, through his sustained campaign has yet again ushered in a victory similar to that of the 2019 Parliamentary election win. 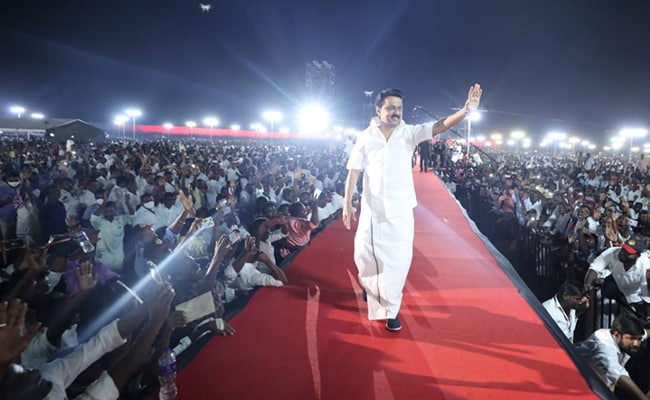 MK Stalin reached out to people systematically by targeting state governments on many issues.

Building a strong narrative over the years against the AIADMK and BJP-led governments in Tamil Nadu and the Centre, DMK president M K Stalin reaped huge success in Assembly polls, recreating the 2019 magic when he won the Lok Sabha polls hands down for his party and allies.

The DMK has won 127 seats, and is likely to win six seats from where it is leading, according to trends. When the segments won by DMK''s partners including Congress are added, it worked out to 153 seats out of the total 234.

Garnering two-thirds of the 234 seats, the 68-year old Stalin, through his sustained campaign has yet again ushered in a victory similar to that of the 2019 Parliamentary election win.

The victory did not, however, land in Mr Stalin's lap and he worked towards it by reaching out to people systematically by targeting the Centre and state governments on many issues.

Be it the National Education Policy, the Citizenship Amendment Act, farm laws or raising voice to bring education back to the state list of the Constitution, he said the BJP-led Centre was "anti-people".

The BJP government trampled on the rights of states and was against Tamil culture and imposed Hindi and Sanskrit and by being ''subservient'' to such a regime, the AIADMK too was against people formed part of his narrative.

The Centre betrayed Sri Lankan Tamils by not voting against the island nation in a recent UN meet added to that ever growing list.

At the same time, Stalin ensured that the AIADMK felt the heat on many issues including a slew of graft allegations against Chief Minister K Palaniswami, his Cabinet colleagues, the NEET issue and the anti-Sterlite protests vis-a-vis the Tuticorin police firing episode in 2018 and many more.

Mr Stalin alleged the AIADMK betrayed Tamil Nadu's interests by being ''servile'' to the Centre and AIIMS hospital in Madurai being a non-starter was one more example.

The DMK chief alleged that Palaniswami assured that hydrocarbon exploration projects would not be allowed, but it still continued in the state. Often he alleged that the AIADMK regime existed only for "corruption, collection and commission".

Accusing Mr Palaniswami of being a fake farmer, he said the state scheme to rejuvenate waterbodies was only for "looting money" by submitting "fake bills". Farmers have not got their pending dues, cyclone relief and there was "corruption" even in paddy procurement.

Though the quota was an initiative of the AIADMK regime, the DMK said it became law only following its protest and pressure mounted on the Governor.

Also, notably, the DMK's election campaign was meticulously planned well in advance and launched several months ahead of assembly elections.

The "Vidiyalai Nokki Stalinin Kural" (Stalin''s voice towards dawn) campaign, kickstarted in November last was soon followed by Stalin launching the ''We Reject AIADMK'' campaign with a mission to win 200 Assembly seats in the polls.

With "Stalin than vararu vidiyal thara poraru" (Stalin is going to capture power/become Chief Minister and usher in a dawn) signboards surfacing everywhere, a song with the same words also pepped up party meetings.

When the AIADMK declared that it was joining hands with BJP for the polls, Stalin tactfully painted the Dravidian rival with the same communal brush and often said "not even a single AIADMK candidate should win and that is because, if the AIADMK nominee wins, he or she would only be a BJP MLA."

Hence, the DMK campaign was to a significant extent against the BJP but also apparently aimed at equally damaging the electoral prospects of the AIADMK combine as a whole.

Another important, state-wide campaign was "Ungal Thoguthiyill Stalin" (Stalin in your constituency), an unconventional meet wherein Stalin heard people's grievances, received petitions and placed in a box and locked it, promising to address them all within 100 days of assuming power.

The poll promises including Rs 1,000 assistance were highlighted and it assured measures including consecration of temples at a cost of Rs 1,000 crore apparently to blunt criticism that it was "anti-Hindu".

Also, alongside the "Ellorum Nammudan" (All with us) a mega membership drive and several other local, regional level initiatives, the party made a concerted effort to reach out to more and more people beyond its committed voters.

At the local level, region specific issues were picked by DMK to connect better to the local people. For example, Stalin devoted time to target the government on its "failure" over the Nandan canal scheme in Villupuram district and in respect of bringing surplus water to Thumbalahalli dam in Dharmapuri district.

In the LS polls, the DMK and its allies bagged as many as 38 out of the total 39 seats and the DMK chief continued the winning streak when his party emerged with a distinctive edge over the AIADMK in rural civic polls towards the end of 2019.

The DMK's 133 seats -including won and leading- include constituencies of allies like MDMK who fought on the ''Rising Sun'' symbol of the Stalin steered party. The DMK's allies, Congress has won 18, Viduthalai Chiruthaigal Katchi four and the two Left parties two seats each.

Though the DMK could not capture power in 2016, Mr Stalin continued to relentlessly take the fight against the AIADMK ahead both in the State Assembly and outside, holding a slew of protests over the years on several issues.

At the same time, his position in the party was further strengthened when he became the working president in early 2017 and the next year its president following the demise of his father and party patriarch M Karunanidhi.