Aaditya Thackeray: From Yuva Sena Chief To His Electoral Debut From Worli

His grandfather, the late Bal Thackeray, who founded the Shiv Sena in 1966, was a cartoonist, an art shared by his estranged uncle Raj Thackeray, the chief of Maharashtra Navnirman Sena (MNS). 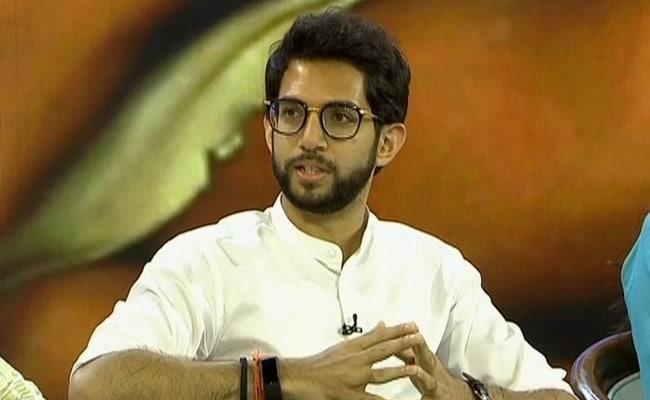 Yuva Sena chief Aaditya Thackeray, who has made family history by entering electoral politics, shares passion for creativity with his grandfather, father and uncle.

His grandfather, the late Bal Thackeray, who founded the Shiv Sena in 1966, was a cartoonist, an art shared by his estranged uncle Raj Thackeray, the chief of Maharashtra Navnirman Sena (MNS).

The 29-year-old, who is the Shiv Sena's candidate from South Mumbai's Worli constituency, is the first member of his family to contest an election.

Aaditya Thackeray's first book of poems, "My Thoughts in Black and White" was released in 2007 by Bollywood superstar Amitabh Bachchan.

He also wrote lyrics of a private album "Ummeed". He hit headlines in 2010 for leading a protest against author Rohinton Mistry's book "Such a Long Journey" in University of Mumbai's English Literature curriculum.

Since then, the youth leader has been at the helm of several such protests and campaigns.

A law graduate, Aaditya Thackeray has always managed to keep himself abreast of civic issues and concerns of the youth in the state.

The Maharashtra government's decision to ban plastic is partly credited to his campaign against the widespread use of the material.

In a bid to attract young followers, Aaditya Thackeray had also proposed the revival of Mumbai's nightlife by allowing malls and restaurants to be open all night.

The Shiv Sena-ruled Brihanmumbai Municipal Corporation has approved the proposal, which is now pending with the chief minister for clearance.

While some of his campaigns saw several takers, a few other projects didn't quite hit the mark.

However, his open gym plan ran into trouble, as they were set up without the civic body's approval.

Under Aaditya Thackeray's leadership, the YuvaSena continues to dominate the Mumbai university Senate for the last two terms.

A product of the Bombay Scottish School in suburban Mahim, Aaditya Thackeray is graduate in English Literature from St Xavier's College and has a Law degree from K C College.

The young politician also sports a creative side like his grandfather, father and uncle.

Despite belonging to a political dynasty of sorts, Aaditya Thackeray is the first in his family to contest an election.

The forthcoming Maharashtra Assembly polls will be a litmus test for Shiv Sena, whether it can bank on the young leader's popularity to win public mandate.