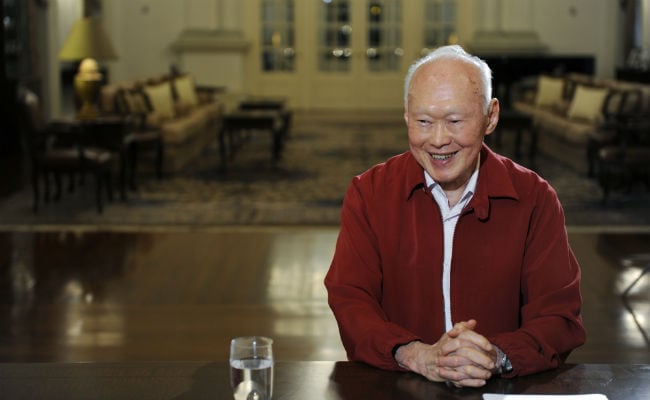 This photograph provided by the Straits Times and taken on August 14, 2009 shows Lee Kuan Yew during an interview in Singapore. (AFP photo/The Straits Times)

Lee Kuan Yew, one of the commanding figures of Asia's post-war economic rise, was an authoritarian leader who transformed Singapore from a sleepy British imperial outpost into a global trading and financial centre.

The former prime minister known as "LKY" died on Monday following a seven-week struggle with pneumonia, aged 91 (DOB: September 16, 1923), after bestriding the city-state's politics for half a century following its emergence from colonial rule.

US President Barack Obama said after meeting the still healthy Lee at the White House in October 2009 that "he is one of the legendary figures of Asia in the 20th and 21st centuries".

The Cambridge-educated lawyer set Singapore on a path that has seen average incomes rise 100 times, with investments across the globe, a widely respected civil service and world-class infrastructure.

But he was criticised for his iron-fisted rule, forcing several opposition politicians into bankruptcy or exile, and once invoked Machiavelli in declaring: "If nobody is afraid of me, I'm meaningless."

But in his last years, he was a shadow of his old self as his health deteriorated following his beloved wife's death in October 2010.

He remained revered by many but also became the target of scathing attacks in social media as some Singaporeans began to muster the courage to speak out against him and the political and social model he had bequeathed.

His impact, through his policies and via his son, current Prime Minister Lee Hsien Loong, is likely to be felt for years to come.

Six years later, he was thrust onto the world stage when he became the leader of a fragile new republic after the largely ethnically-Chinese Singapore, with just two million people, was ejected from the Malayan federation.

"We faced tremendous odds with an improbable chance of survival," Lee wrote in his memoirs.

"We inherited the island without its hinterland, a heart without a body."

But under his stewardship, Singapore courted international capital and used foreign labour to plug its manpower gap until it became one of Asia's wealthiest, safest and most stable societies.

Despite criticism of Lee's autocratic rule, Singapore was widely hailed as a model for development during a period when it soared above other former colonies that endured conflict and economic mismanagement.

Dismissive of liberal democracy, Lee anticipated the emergence of China as a world power and established close links with Beijing, giving Singapore investors enviable access to the giant market.

At the height of his powers, a number of opponents went bankrupt or fled into exile after being ordered to pay hundreds of thousands of dollars in defamation damages to Lee and members of his inner circle, while alleged radicals were held without charges under internal-security laws.

Lee also launched what critics called a "nanny state" that urged highly educated Singaporeans to intermarry and produce smart babies, banned sales of chewing gum and hectored its public about spitting on the streets and failing to flush public toilets.

Born on September 16, 1923 to a 20-year-old father whom he described as a "rich man's son, with little to show for himself" and a 16-year-old bride in an arranged marriage, Lee grew up thinking British colonial rulers were invincible.

He had a rude awakening during World War II after Japanese invaders easily overran British forces and took over Singapore in 1942, shattering the myth of European supremacy in Asia.

"The dark ages had descended on us. It was brutal, cruel," Lee said of the Japanese occupation, calling it "the biggest single political education of my life because, for three and a half years, I saw the meaning of power".

Lee survived massacres of civilians and at one point worked for Japanese propaganda. After liberation, he left to study law at Cambridge, where he secretly wed his classmate Kwa Geok Choo before returning home in 1950.

Lee was shaken by Kwa's passing after more than 60 years of marriage and admitted that "at this moment of the final parting, my heart is heavy with sorrow and grief".

They had three children, the oldest of whom is Lee Hsien Loong. Daughter Lee Wei Ling became a doctor, and son Lee Hsien Yang became a top corporate figure.

Promoted
Listen to the latest songs, only on JioSaavn.com
Lee stepped down as prime minister in 1990 and handed power to his deputy Goh Chok Tong, who in turn gave way to the veteran leader's elder son in 2004.

In 2011, he stepped down as a cabinet adviser after the ruling People's Action Party suffered its worst performance yet in a general election, its share of the vote falling to a low of 60 per cent.