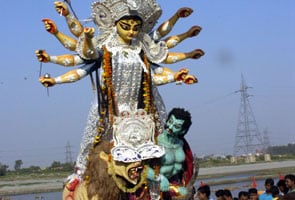 Patna: In a rare show of brotherhood, Muslims in a village in Bihar's Purnia district joined hands with Hindus to celebrate the Durga Puja.

Only four Hindu families live in Saguuniya, a Muslim-dominated village about 400 kilometers from Patna. But they celebrate Durga Puja with fanfare, thanks to the support of Muslims.

"We are lucky that Durga Puja is celebrated in our village by Muslims. This is unheard of anywhere else," said Nitai Gopal Chandra Roy, a Bengali Hindu villager.

"Without Muslim support, we can't think of celebrating the festival in such a big way," he said.

Another Bengali Hindu in the village, Dhanajay Roy, echoed him.

"It is a beautiful experience. Muslims not only help us prepare for the festival but also join us to offer prasad and other rituals," he said.

Mohammad Rizwan, one of the dozens of Muslims who helped Hindus celebrate the festival, said he and other Muslims were only continuing an age-old tradition.

"It is a matter of tolerance preached by Islam that one should help the other," Mr Rizwan said.

Shaukat Alam, another Muslim, said dozens of Muslim youths helped clean up the village and streets for the festival. "It is a classical case of communal harmony," he said.

Durga Puja was started in the village by the Roy family of Saguniya estate some 500 years ago. With time, most of the Hindu families migrated.