5 Dead, 9 Injured in Explosion at Firecracker Unit in Visakhapatnam 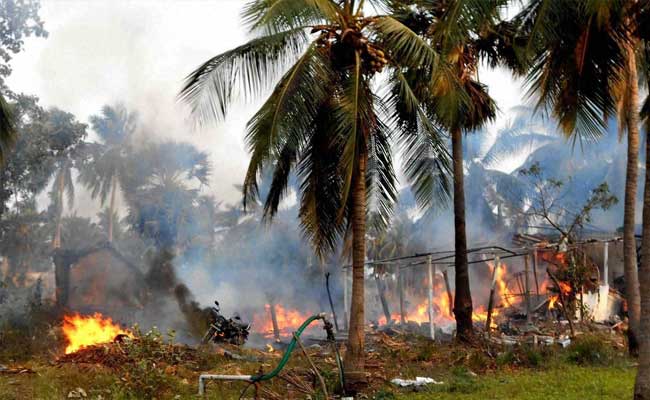 A view of explosion site at a fire cracker manufacturing unit near Visakhapatnam in Andhra Pradesh. (PTI)

Hyderabad:
At least five workers, mostly women, were killed and nine others were injured in an explosion and subsequent blaze at a firecracker manufacturing unit in a village of Andhra Pradesh's Visakhapatnam district on Sunday, police said.
The incident occurred this evening at Gokulpadu village in Visakhapatnam district between 4:30 pm and 5 pm under S Rayavaram police station limits, district Superintendent of Police, K Pravin said.
"Five bodies were recovered from the spot. Nine others were injured, of which condition of four persons is critical," the Superintendent of Police told the Press Trust of India over phone.
Most of the deceased are women working at the unit, he said.
The blaze soon spread to the adjoining areas, but fire engines were pressed into service which brought it under control, he said.
The exact reason behind the explosion and the subsequent fire was yet to be ascertained, though district fire officer is probing into the reasons, the officer said.
The injured were rushed to a nearby hospital.
Narasipatnam Deputy Superintendent of Police, Yesu Babu, who rushed to the spot and was monitoring relief and rescue operation, said four bodies were charred.
"There was a sudden explosion at the unit and the workers died due to the impact of the blast and burn wounds," he said.
Promoted
Listen to the latest songs, only on JioSaavn.com