Reliance Industries Ltd. reached another milestone this week with its Jio Payments Bank getting the go-ahead to begin operations, Mint reported Thursday.

A venture with State Bank of India, the financial services startup is to be launched by the end of March, Mint said, citing people familiar with the plans.

Indian billionaire Mukesh Ambani has been busy. His Jio telecom business clocked up 100 million fourth-generation mobile customers in less than six months -- not so difficult when you offer the service free.

As Gadfly's Andy Mukherjee noted last month, the battle is only just beginning for Jio to turn that massive user base into revenue, and then profit. Jio Payments Bank could help Ambani extract more from each customer, now that he's decided to start charging telecom fees in what's sure to be a tough fight for both mobile-phone and digital-payments share. Rivals in payments include One97 Communications Ltd.'s Paytm,  Bharti Airtel Ltd.'s own offering and a government-promoted cross-bank system. 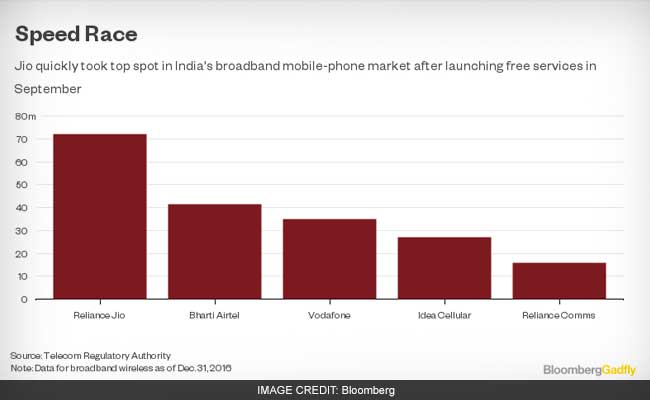 If Ambani wants to keep that brisk momentum, he should go a step further than launching his own payments bank and buy Paytm outright.

A great beneficiary of Indian demonetization, Paytm had 177 million wallet users by the end of December and processed 1 billion transactions last year. Buying the company, backed by Alibaba Group Holding Ltd., would give Jio between 77 million and 177 million new users (doubtless there'd be overlap). It would also help push the sector into the consolidation that's going to come sooner or later anyway.

Beyond getting a boost to user numbers and an established fintech brand, Jio could also benefit from teaming up with both Alibaba and its payments affiliate Zhejiang Ant Small & Micro Financial Services Group, better known as Ant Financial. Such proximity could also help bolster Reliance Retail Ltd. while giving Alibaba access to the Indian giant's bricks-and-mortar expertise.

There is a price, of course. That would be somewhere north of $5 billion, given an August funding round that put Paytm's valuation at $4.83 billion. But after India's richest man plowed $25 billion into his telco, that seems like a drop in the ocean.

In cricket parlance, India's digital development is less a Test match and more a Twenty20 tournament. And as a fan himself, Ambani knows that you can't win by playing safe or hitting singles. He has to swing for sixes.

(Except for the headline, this story has not been edited by NDTV staff and is published from a syndicated feed.)
Comments
Jio PaymentsReliance Industries Ltd.State Bank of India (SBI)AlibabaPaytm