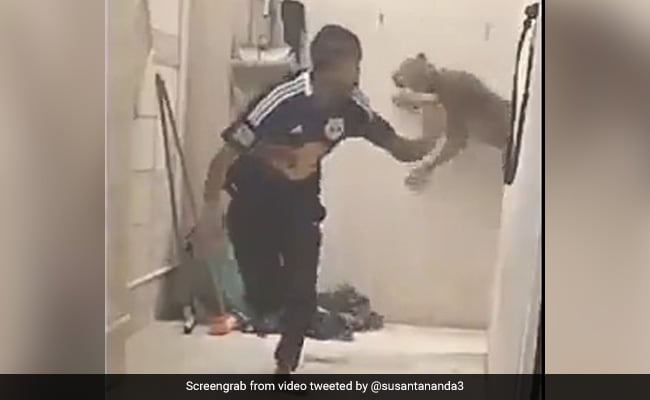 A viral video shows a leopard chasing a man down a narrow corridor.

At the end of a long day, many of us find solace in cute animal videos that are available in plenty on the Internet. But not all videos will make you smile and put you in a happy mood. Some will make you reassess your plan to visit an animal sanctuary on your next vacation. One such video that had a hair-raising effect on the good folks of the Internet is a clip of a leopard chasing a man. If that visual wasn't scary enough, you should know that the incident does not occur in the vastness of the jungle but along a narrow corridor.

The video that first came to light in 2015 resurfaced recently and has Twitter users hooked. On Thursday, the clip was shared by Indian Forest Service officer, Susanta Nanda who added the note, "That was close," along with the video.

The footage features a man rushing into a corridor at tremendous speed. He is also seen constantly looking over his shoulder with a panic-stricken face. He momentarily falls, only to immediately pick himself and break into a sprint. And just as one is wondering why the man appears to be running for his life, the leopard enters the frame. The animal is seen attempting to make a sharp left turn in pursuit of its victim but scales the wall instead, in a bid to control its momentum.

And when the man and leopard finally appear in the same frame, the video cuts off. Well, that's a cliff-hanger if there ever was one. With no geotag on the video, there is no information on what fate befell the man, and who was recording the entire incident. The video has amassed over 18,000 views in less than 24 hours and a plethora of reactions.

Needless to say, Twitter users were curious to know what happened to the man.

Summing up the most common emotion felt among viewers of the video, one user asked earnestly, "Sir, what happened next. Has that man safely escaped or...?"

"What happened next? Can we get a glimpse please?" requested another user.

What happened then ... Can we have a glimpse pls.

Many users also doubted the veracity of the video. One user said, "This is staged. No way would I see a cheetah do what it did. It is unnatural of it to fly high that way."

This is staged. No way would i see a cheetah do what it did. It is unnatural of it to fly high that way. someone threw it

Take a look at some of the other reactions:

Heart in mouth! Did the guy make it?

Some viewers described the incident to be the stuff of nightmares:

Tell us what you think may have happened to the man in the video.