The plane could be heard honking as it slowed down to stay behind the bird. 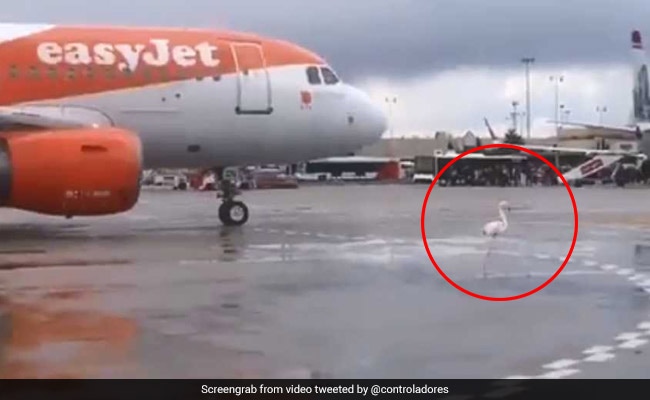 An easyJet plane had to slow down to stay behind a flamingo.

How many men does it take to hold up a plane? None, it turns out. All it takes is a slow-walking flamingo. That is precisely what happened when holidaymakers arrived in Majorca, Spain, and had to wait inside their aircraft as a flamingo ambled down the runway in front of their plane. Daily Mail reports that the easyJet flight was help up briefly on Sunday because of the big bird as it arrived at the airport.  A hilarious video of the flamingo strutting down the runway was filmed by an airport worker.

According to a translation provided by Daily Mail, the airport worker who filmed the incident could be overheard saying: "We have a pink flamingo and it's no joke. An easyJet plane has had to brake." The plane could also be heard honking as it slowed down to stay behind the bird.

The video was shared online by the air traffic control's official Twitter account. Watch the video below:

The bizarre scene has collected over 1,700 'likes' and many amused comments.

Hmm..when you're flight is delayed and you don't know why :-) https://t.co/TjQk4n0YXr

A wildlife control department was alerted of the bird at the airport. However, Daily Mail reports that the flamingo flew away on its own before a team could catch it.