Watch: Beautiful Interaction Between A Little Bird And Girl Is Too Cute To Miss

An adorable clip capturing a beautiful bond between a bird and a girl is gaining traction on social media, making people smile. 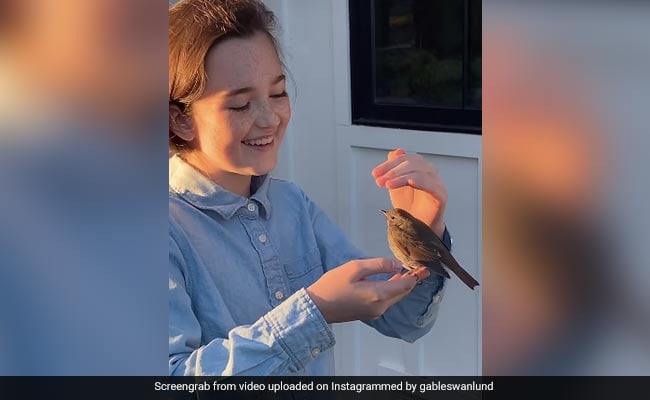 The internet loves watching animal and bird videos because those are extremely adorable. More so, videos displaying wholesome friendships between a human and a bird or animal are pretty fascinating, to say the least. One such adorable clip capturing a beautiful bond between a bird and a girl is gaining traction on social media, making people smile.

The video was shared on Instagram by a user called Gable Swanlund, who has over 29,000 followers. She captioned the clip as'' Well this felt supernatural. A sweet little bird crashed into our window and after this beautiful interaction, she flew away fit as a fiddle. A golden hour miracle.''

As the caption suggests, a little bird crashed into the girl's window and was immediately rescued by her. In the clip, she is seen holding the bird in her fingers and caressing her gently. As the bird is comfortably perched on her fingers, the girl even sings a beautiful song for her. All this while, the bird intently listens to the girl and seems that it is extremely relaxed in her presence. The girl even holds the bird close to her and is amazed by its delightful response. It is as though the bird is enjoying the soothing song while being loved and cared for.

The video has delighted social media users, who loved this sweet interaction and blessed the girl for displaying such kindness towards the bird. Others also praised her beautiful voice and said that the moment seems straight out of a ''Disney movie''.

One user wrote, '' Oh sweet angel girl. And sweet angel birdie!! And bless that beautiful voice of yours!!''. Another commented, '' The bird felt your wonderful energy amazing.'' A third said, '' Right out of a Disney fairytale..beautiful.'' A fourth said, '' Wow!! What an incredibly beautiful moment in time. And my absolute favorite song!''

A few months back, another heartwarming story documenting the beautiful bond between a woman and a bird tugged at the heartstrings of online users. The woman revealed how a bird nested in her hair for almost three months after being abandoned by its flock. Hannan told The Guardian in an interview that the bird was abandoned by his flock and his nest was blown from the mango trees. Unable to find a home, it started nesting in Hannah's hair and thought of her as its mother.