"Huge respect for the driver of this Government bus in Nilgiris who kept his cool even under the terrifying hits on the bus from an agitated tusker." 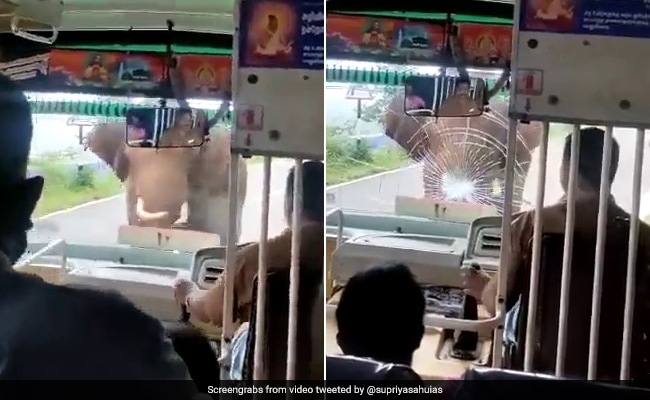 An elephant was filmed shattering the windshield of a bus

A hair-raising video shows the moment an angry elephant charged at a bus in Tamil Nadu, shattering its windshield. The incident took place on Saturday morning while the state-owned bus was ferrying government employees from Kotagiri to Mettupalayam, reports Daily Mail. Footage filmed by a passenger inside the bus shows the elephant charging at the windshield and smashing the glass with its tusks as passengers screamed in shock.

Not content with just smashing the windscreen, the elephant rears its head back as if to attack once more. At this point, the driver gets up and herds all passengers to the back of the bus.

The video was shared on Twitter by Supriya Sahu, Principal Secretary, Environment, Climate Change and Forests, at the Government of Tamil Nadu, who praised the driver for keeping a cool head in a stressful situation.

"Huge respect for the driver of this Government bus in Nilgiris who kept his cool even under the terrifying hits on the bus from an agitated tusker," Ms Sahu wrote while sharing the clip. "He helped passengers move back safely, in an incident today morning. That's why they say a cool mind works wonders," she added.

Huge respect for the driver of this Government bus in Nilgiris who kept his cool even under the terrifying hits on the bus from an agitated tusker.He helped passengers move back safely, in an incident today morning. Thats why they say a cool mind works wonders VC- by a friend pic.twitter.com/SGb3yqUWqK

The elephant eventually moved away without damaging the bus any further.

Meanwhile, footage of the elephant attack has been viewed nearly 70,000 times on Twitter, collecting shocked reactions.

Many praised the driver's presence of mind

Drivers need this courage and coolness to handle such situations..

Reversing the Bus in a Ghat section when an animal conflict is so risk but still he handled it maturedly. ????????

TNSTC can proud of its drivers

Extraordinary brilliant helping passengers by using high presence of mind, what a talent !!!

Frm opposite angle..
Initially he presumed he can bypass tusker and carry on..jumbo got triggered..imho pic.twitter.com/6XcL6T1no0

for this time went well. why aren't there corridors so the elephant can walk or cross in peace ? Try to respect the elephants , we invaded their land !

Last year, a video that went viral on Twitter showed an elephant charging at a two-wheeler, forcing its riders to abandon the vehicle and run.