Video: Girl, 5, Who Lost Her Limbs To Meningitis Completes Half-Marathon

"We stopped a few times and Harmonie did get a bit bored but she soldiered on, she was such a little star." 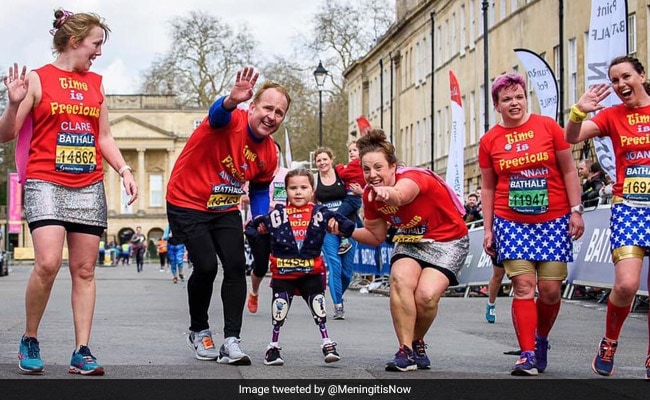 Harmonie-Rose Allen took part in a half-marathon on Sunday.

A five-year-old girl who lost all her limbs to meningitis recently participated in a half-marathon in Bath, UK. An inspiring video going viral online shows Harmonie-Rose Allen being cheered across the finish line by supportive spectators. BBC reports that she walked the final few metres of the course all by herself on Sunday. A seven-member team of family and teachers pushed her in a special running chair for the rest of the marathon.

Harmonie-Rose contracted meningococcal septicaemia and was given a 10% chance of survival in 2014. Somerset Live reports that she survived the battle with septicaemia, which robbed her of all four limbs and part of her nose.

On Sunday, the five-year-old girl finished the half-marathon wearing prosthetic legs to huge cheers and hugs from her proud parents, Ross Allen and Freya Hall.

"We stopped a few times and Harmonie did get a bit bored but she soldiered on, she was such a little star," Ms Hall said to BBC.

"At the end she said she wanted to walk, so she went for it. I feel so proud of her."

Praising the young girl, UK charity organisation Meningitis Now wrote that her feat would be a "massive inspiration to people everywhere living with the after-effects of meningitis."

She did it! ???? ???? ???? So proud to see Harmonie Rose finish the Bath Half Marathon this weekend - she had meningitis at 10 months & had to have her legs & arms amputated, but she hasn't let it hold her back! What an inspirational little star! Read more ➡️ https://t.co/7myQP4lLorpic.twitter.com/VTWdvlttVY

Others on social media also cheered for Harmonie