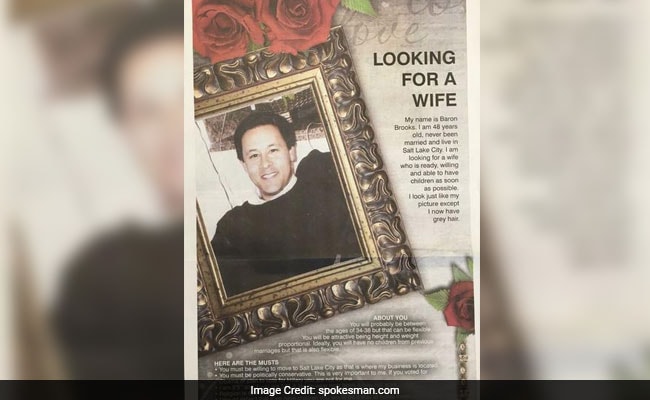 Baron Books, who is a broker in the health food trade, quickly deduced that it was his father Arthur Brooks, 78, who was behind the USD 900 Coeur d'Alene Press ad.

Los Angeles: A father desperate for a grandchild has taken out a USD 900 full-page ad in an American newspaper to get a wife for his 48-year-old son, asking prospective women who meet the criteria listed such as age, height and political views to come for an interview.

Salt Lake City businessman Baron Brooks was shocked to see a full-page advertisement in a North Idaho newspaper inviting candidates for an interview to be his wife.

Baron, who is a broker in the health food trade, quickly deduced that it was his father Arthur Brooks, 78, who was behind the USD 900 Coeur d'Alene Press ad, which listed criteria such as age, height and political views -- "If you voted for Obama or plan to vote for Hillary you are not for me."

"My father did this without my consent. I can't even describe to you how embarrassing and ridiculous this is," Baron was quoted as saying by The Spokesman-Review.

He said he was infuriated with his father but also does not want to hurt his feelings. And so he has decided to let his father Arthur, of Beverly Hills, California, to proceed with interviewing women who meet the specifications for a suitable mate.

According to the ad, the interviews will take place on Saturday at a resort in Coeur d'Alene.

"And then I'll have words with my father separately," said Baron, the owner of two health food stores. "Who knows, it can't hurt. Who the hell knows?"

"What am I supposed to do? He already did it. No sense in defusing a bomb once it's already gone off," he said.

Arthur said he would not answer any questions about his ad until noon Sunday, presumably after he selects a winning prospect for his son.

Baron described his father as "nuts", "neurotic", "passive-aggressive" and without boundaries.

"That's my dad: stumbles into stuff, has a loud mouth, thinks he does the right thing, and then it all blows up in his face," he said.

Baron also said his father has been ill and really wants a grandson to carry on the family name.

Asked why his father would buy an ad in a small daily newspaper in Idaho, Brooks said his dad recently vacationed in Coeur d'Alene and may have been drawn to the area's conservative politics.

"He knew I'm a political conservative, OK?" said Baron, who also is Jewish. "And most Jewish girls are quite liberal, and that doesn't work for me," he said.

The ad noted that Baron is "looking for a wife who is ready, willing and able to have children as soon as possible," and also that "you would be a stay at home mom".