Two Women Fined Rs 28,000 For Performing Stunts On Bike. Their Video Is Viral

Shivangi Dabas and Sneha Rajvanshi were filmed performing stunts on a bike in Ghaziabad. 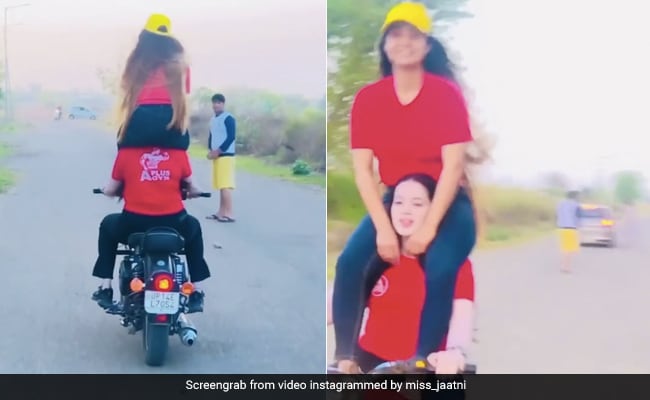 Shivangi Dabas and Sneha Rajvanshi were filmed performing stunts on a bike.

Two social media influencers have landed in hot water after posting videos that show them performing potentially dangerous stunts on a motorcycle. Shivangi Dabas and Sneha Rajvanshi were issued fines by the Ghaziabad traffic police for several traffic violations after their videos went viral.

"The two bike owners have been issued challans on various counts of traffic rule violations, which include driving without licence, performing stunts at public places without permission from officials, faulty number plates and triple riding. The combined challan on two bike owners amounts to Rs 28,000," said Ramanand Kushwaha, SP (traffic), Ghaziabad, to Times of India.

The Uttar Pradesh Police on Thursday reminded people that performing stunts while driving is a punishable offence while sharing a copy of a challan that was issued to the two women.

In a video message shared on Wednesday, Ms Dabas, who belongs to Ghaziabad, said that the stunts were not filmed on a highway, as reported earlier, but near a construction area not frequented by too many people.

She said she had already received a number of challans - one for Rs 11,000 and another for Rs 17,000 - as she requested the police department to stop issuing more challans.

Footage that has gone viral on social media shows Sneha Rajvanshi riding a bike with Shivangi Dabas sitting on her shoulders. Both the women, who are reportedly in their early twenties, wore red T-shirts and jeans.

The videos, uploaded on Instagram, came to the attention of Ghaziabad police. The challans were sent to Manju Devi and Sanjay Kumar, who own the two bikes used by Ms Dabas and Ms Rajvanshi to perform stunts.

Speaking to Times of India, Ms Dabas said that she and Ms Rajvanshi had just received their learner's licence. She said they performed the stunts on Saturday, not knowing it would snowball into a controversy.

"Ever since the video went viral, we have been severely reprimanded by our parents. They will probably not allow us to ride the bike anytime soon," Ms Dabas added.