"This is not a giveaway. You're not Oprah. These are essential items. People need to survive," said a tweet 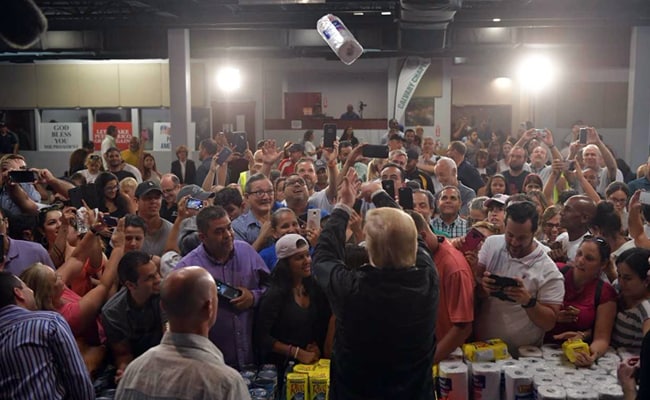 In a trip meant to battle criticism of his administration's response to the ongoing disaster, US President Donald Trump arrived in Puerto Rico to meet with survivors of Hurricane Maria.

President Trump shook hands with storm survivors and told them to be "proud" the island did not lose more lives to Hurricane Maria.

The US president, along with First Lady Melania Trump, visited the middle class suburb of Guaynabo where he asked residents about their homes, posed for photos and stopped at the Cavalry Chapel along the way to shoot rolls of paper towel basketball-style into a crowd snapping pictures on their cellphones.

That last gesture angered more people than it pleased, especially on Twitter.

Promoted
Listen to the latest songs, only on JioSaavn.com
A journalist posted a video of President Trump shooting paper towel rolls into the crowd

There's video of Trump shooting paper towels into the crowd and it does not disappoint pic.twitter.com/KPfJ1AeAqk

And people did not react kindly to it

is it edible? can they drink it? does it give them immediate cell phone service? Is a generator wrapped inside? surely i'm missing something

The president is throwing paper towel rolls into the crowd in Puerto Rico like a t-shirt cannon at a sporting event. 2017, man.

It disappoints! It disappoints me to see my people desperate and the "president" thinks he's at a Knicks game.

Only an idiot would offer disaster relief by acting like a mascot at a pep rally. What's worse is that he also happens to be the president.

This is humiliating. It's not throwing out Tee-Shirts at an NBA game...

THIS ISN'T A GIVEAWAY YOU'RE NOT OPRAH THESE ARE ESSENTIAL ITEMS THESE PEOPLE NEED TO SURVIVE https://t.co/dTSReZykwe

Nearly two weeks after Maria hit Puerto Rico, much of the island remains short of food and without access to power or drinking water.