Twitter user Donna Hall tweeted: "Not only did you teach them mathematics in this class, but also compassion, empathy, kindness, generosity, community building, caring for others and how to win at life." 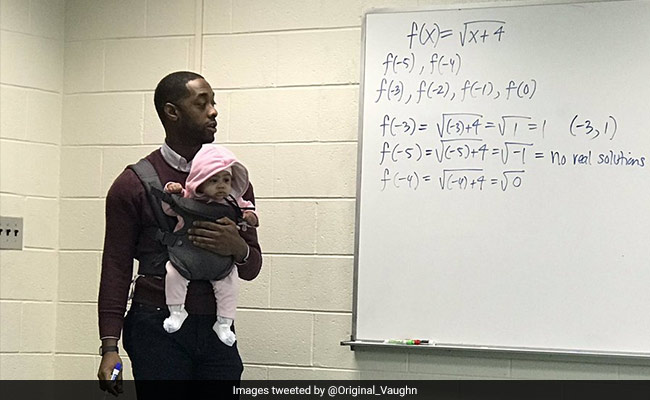 Mathematics professor Nathan Alexander held a student's baby so he could take notes in class.

Hayer knew the classroom rules, but unlike most students caught using their cellphones, the 26-year-old was not scrolling through Instagram in class two weeks ago. He was texting his wife about their 5-month-old daughter, Asada.

Alexander, 34, called it "a moment of redirecting."

"Our goal is to instill leadership in our students," he said in an interview Sunday with The Washington Post. "I want to be a model of that, and I think Wayne is a model of that. He was focused on his academics in spite of everything else he had going on."

The professor told his student without hesitation, "If that's the issue, bring her to class."

Hayer hadn't planned on testing his teacher's word; the college senior held down two jobs while studying kinesiology at Morehouse, in Atlanta, and his wife typically stayed at home with their newborn.

On Friday, his wife planned to pick up their daughter's birth certificate, but Hayer didn't want her struggling on public transportation with an infant. He offered to take Asada. Unable to find child care, Hayer thought, "Dr. Alexander did say, 'Bring your kid to class, if need be,' and I had to get to the lecture because we were taking a test soon."

The Friday algebra class would soon become a moment shared across the Internet.

Hayer dressed Asada in a onesie, a pink sweater and a hat, and packed her blanket in his backpack. Strapping her to his chest, he left his West Side apartment for campus.

"I was apprehensive about it," Hayer said during an interview with The Post. His mother had told stories about bringing him as a baby to her own community college classes, but Morehouse is a historically black men's college.

He had never seen another Morehouse student bring a baby to class, although he had heard about young women - wives and single mothers - doing so.

"I had a book bag on and a baby strapped to my chest. I looked crazy," he said. As he approached the classroom door, Hayer felt intimidated. "Then Dr. Alexander saw me and welcomed me with open arms."

Alexander offered to hold Asada so Hayer could take notes. The father strapped the infant onto his professor's chest and then the class continued reviewing domains, functions and ranges.

Hayer called his classmates "supportive." Later, many said it meant a lot for the class to see Alexander, who has taught at Morehouse since September 2017, support Hayer.

"There's a negative stereotype about African American men not being fathers to their children and a myth that most black people come from single-parent households," Hayer said.

"To see a young African American man do it was empowering for people to see. The image and symbolism were important in changing how we view masculinity."

Classmate Nick Vaughn posted a photo of the scene on Facebook and Twitter that soon spread to Reddit. At the time of publication, the tweet was liked 296,000 times, and had been retweeted more than 72,000 times.

Student came to class today with his child due to no babysitter or anybody to watch her while he was in class.
My professor NATHAN ALEXANDER said “I'll hold her so you can take good notes!” #HBCU#morehouse#Respectpic.twitter.com/oogIqetseS

Alexander was also lauded by others he had taught and many he had never met for lending his student a hand.

Twitter user Donna Hall tweeted: "Not only did you teach them mathematics in this class, but also compassion, empathy, kindness, generosity, community building, caring for others and how to win at life."

Tanya Lundberg wrote, "Imagine what people could accomplish if they received this level of support in school."

One user, who does not know Alexander, recounted in the comment section on Twitter how supported she felt when her professor encouraged her to bring her baby to class, too.

David A. Thomas, president of Morehouse College, said that the mission of Morehouse, which just celebrated its 152nd anniversary, is to help men develop disciplined minds so they can lead lives of leadership and service.

"Dr. Alexander is an example of what our professors are willing to do to help Morehouse College scholars to succeed in their academic pursuits," Thomas said in a statement to The Post. "I commend him, and senior Wayne Hayer, the father of the infant, for showing leadership and service, which is part of the mission of Morehouse College, and an expectation of Morehouse Men."

Hayer called the experience "a lean-on-me Eastside High kind of moment: I felt backed into the corner and Dr. Alexander became that person I could lean on. It made the learning environment all the more special."

Alexander returned the sentiment during an interview with The Post, expressing pride in his student, whom he said was dispelling stereotypes about black men and who can practice mathematics.

Society, he said, doesn't think about the intersection of education and parenting.

"There's an idea of what a student is and we don't think about ways to support parents that are students. That's where I come in," he said. "Community matters. I want a world where Wayne doesn't feel like he can't get ready for his exam even though his child care fell through."