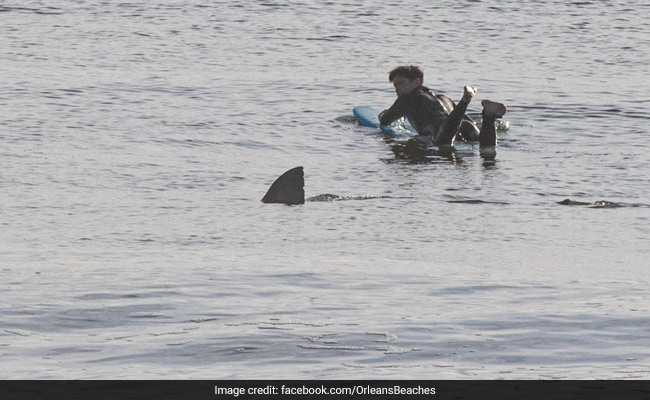 Jim Mault's photograph shows the surfer just a few feet away from a shark.

Devon Zimmerman had only been surfing the waters of Cape Cod for a couple of minutes before he heard something splashing in the water. A picture clicked by a photographer standing on the beach has captured the moment Mr Zimmerman turned around to realise that the "something" was actually a great white shark less than 10 feet away from him.

Brooklyn resident Devon Zimmerman told NY Daily News that he'd paddled on his surfboard for about three or four minutes off Nauset Beach on Friday morning when he heard rustling in the water. When he turned, he saw a great white shark's head popping out.

He said that he froze when he saw the shark. To WCVB, he described his response as one of "pure shock".

Thankfully, he escaped by lifting his feet out of water and waiting on his surfboard while the shark swam away. He then returned to the beach.

Jim Mault, who owns Orleans Camera, clicked the photograph that shows Mr Zimmerman just a few feet away from the shark's fin. Mr Mault said that he shouted a warning and continued filming as the surfer made his way back to the shore.

"It was definitely tense," Mr Mault told WCVB. "He very calmly turned over, then paddled back in."

Mr Mault's photograph was shared by the Orleans Department of Public Works and Natural Resources on Facebook as a reminder to beachgoers to remain vigilant.

The picture has gone viral, collecting a ton of shocked comments.

"I will never go in the water again," wrote one person. "So relieved nobody was hurt," said another.

Just a few days ago, a surfer in Australia managed to escape from a rapidly-approaching shark, all thanks to a drone.