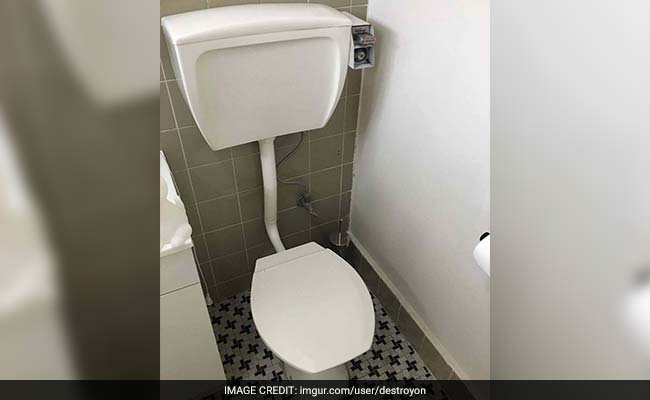 In a Reddit post, the tenant shared his plight with netizens, asking if this arrangement was legal.

Think you have it bad with a nosy landlord or one who doesn't provide enough services in your accommodation? Chances are your situation may not be as dire as this Melbourne resident whose landlord installed a coin-operated flush in his toilet. Can you imagine paying a dollar per flush?

In a Reddit post, shared four days ago, the tenant shared his plight with netizens, asking if this arrangement was in fact legal.

"Is it legal for my landlord to have installed a dollar coin operated flusher on my toilet?" he says on the social networking site. He further explains that the landlord's reason for this was 'a government incentive to save water'.

Wondering if he had been duped by the landlord, the man is now consulting a lawyer to figure the legality of his situation.

"My friend is also coming over and he thinks we can remove the top cover without really damaging the landlord's "property". Then at least for now I can get to the flushing lever thingy," he added. 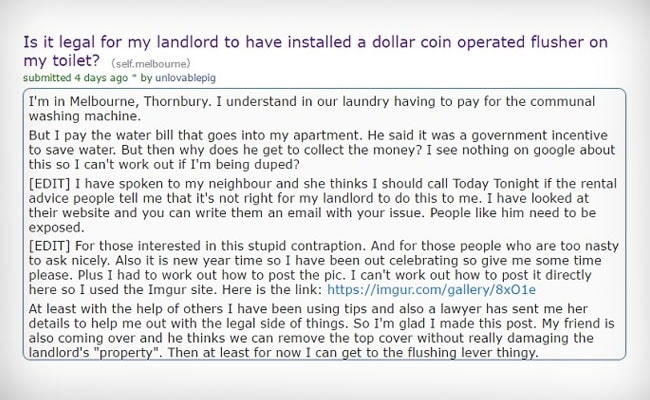 In addition to asking for a picture of the contraption, people on Reddit shared several suggestions and opinions on the post. Many others said the incident and picture couldn't be real.

"Its probably illegal and definitely unprincipled , but from my asia experience one can use water from bucket or container to flush once you get the knack (sic)," said one commenter "endtoiletgate2k17," said another.

Promoted
Listen to the latest songs, only on JioSaavn.com
"If you take coffee stirrers and put them in the slots, push, itll trigger the lock just the same (sic)," a Reddit user suggested. "I'm calling troll. This is 100% fake," said another Redditor.

What do you think about this post and the arrangement it mentions? Share your thoughts in the comments section below.

Viral Video Shows Man Leaving Dog Poop On Train. Here's Why He Did It