Mr And Mrs, Old And New. Love Wins With Anushka-Virat And Sophie-Joe 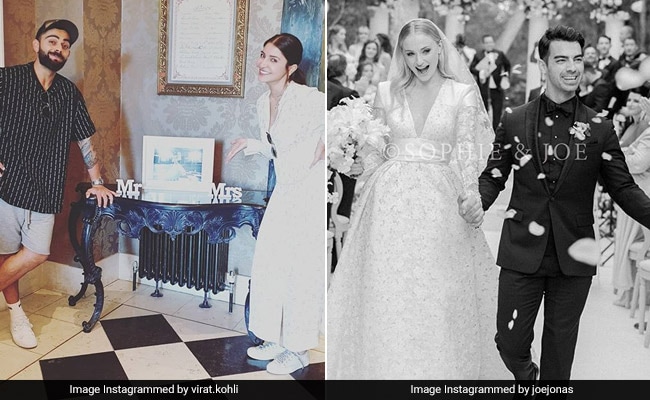 Virat-Anushka and Sophie-Joe lit up Instagram with their "Mr and Mrs" posts.

Two posts on Instagram from different ends of the world prove that old or new, nothing can bring a smile to your face quite like love can. The first came from India captain Virat Kohli, who is currently in England for the ongoing ICC Cricket World Cup 2019. On Wednesday, Virat shared a picture with wife Anushka Sharma which shows the couple posing with a photo frame, smiling for the camera.

"Mr and Mrs" Virat captioned the picture, borrowing the words from the photo frame he posed with. A heart emoji completed his post, which has received over 3 million 'likes' in less than 24 hours.

Virat Kohli and Anushka Sharma got married in 2017, and pictures from their destination wedding in Italy nearly broke the Internet at that time.

But while Virushka show us that, two years on, they are still as cute as newlyweds, it was another "Mr and Mrs" post that lit up Instagram on Thursday. Sophie Turner and Joe Jonas shared the first official photo from their wedding, which took place in France, on social media. As expected, it went viral in no time.

Both Sophie and Joe shared the picture on their respective Instagram account and captioned it "Mr and Mrs Jonas". The delightful picture shows them walking down the aisle hand in hand and with huge smiles on their faces, after the ceremony. In the background, guests can be seen applauding the 'just married' couple.

Together, Sophie and Joe's pictures have collected a whopping 5 million 'likes' in a matter of hours.

What do you think of these "Mr and Mrs" posts? Let us know using the comments section.