Meet "Bob-Cut Sengamalam": An Elephant Famous For Her Unique Hairstyle

Sengamalam's hair is washed three times a day during the summers and at least once a day in other seasons. 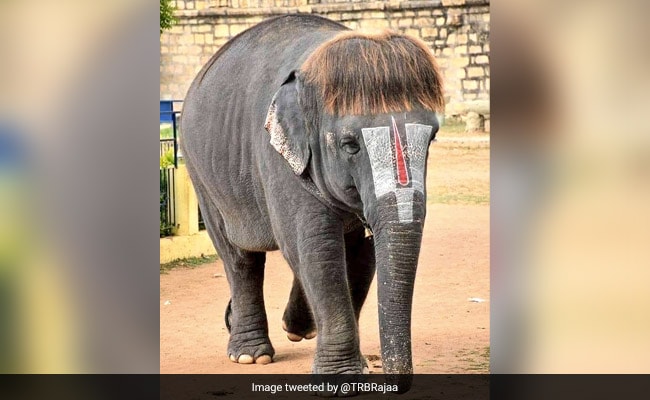 Sengamalam the elephant is famous for her bob cut hairstyle.

An elephant from Tamil Nadu has her own fan base on the Internet, thanks to her unique hairstyle. Sengamalam the elephant lives at the Rajagopalaswamy Temple in the town of Mannargudi, but her bob-cut hair has earned her fans across the country. Photos of the elephant, who is fondly called "Bob-cut Sengamalam", have captured the Internet's attention once again after they were posted on Twitter a day ago by Indian Forest Service officer Sudha Ramen.

According to Mannai Online, Sengamalam was brought to the Rajagopalaswamy Temple from Kerala in 2003. Her mahout, S Rajagopal, is responsible for her unique fringed hairstyle - which requires a lot of maintenance and care.

"She is famously known as 'Bob-cut Sengamalam' who has a huge fan club just for her hairstyle," wrote Ms Ramen while sharing the pictures that have now gone viral on the microblogging platform.

She is famously known as "Bob-cut Sengamalam" who has a huge fan club just for her hair style. You can see her at Sri Rajagopalaswamy Temple, Mannargudi, Tamilnadu.
Pics from Internet. pic.twitter.com/KINN8FHOV3

The photos have collected over 10,000 'likes' and many in the comments section shared their own experiences of meeting the elephant.

When she was in Elephant Rejuvenation Camp, Mettupalayam☺️
She is very friendly and cheerful pic.twitter.com/aMKkGBzPnH

"Sengamalam is like my child. I wanted her to have a special look," Sengamalam's mahout, Mr Rajagopal, told the Times of India in 2018. "Once I watched an elephant cub with a bob-cut in a video on the Internet. So, I started to grow Sengamalam's hair," he said, adding that the haircut was only possible because of the pachyderm's quiet and friendly nature.

Bob-cut Sengamalam's unique look has won her a number of fans and admirers, and her pics are often shared on social media by visitors to the temple.

Must clarify that she is also one of the few #Temple#elephants that is NOT "tied up" all times. She does roam freely for sometime whilst the temple is shut and when devotees are not allowed near her.Her upkeep has truly been well taken care of. Of course nothing beats "nature"???????? pic.twitter.com/KVwPq1ZvMo

According to Mr Rajagopal, Sengamalam's hair is washed three times a day during the summers and at least once a day in other seasons. The mahout has also installed a special shower, worth Rs 45,000, to keep her cool during the hot summer months.

According to CNN, the hair that elephants have on their head helps carry heat away from their body into the air.

What do you think of Sengamalam's unique hairstyle? Let us know using the comments section.