A man who made it to the prestigious Forbes 'Under 30' list shared the reaction of his father which is winning the internet. 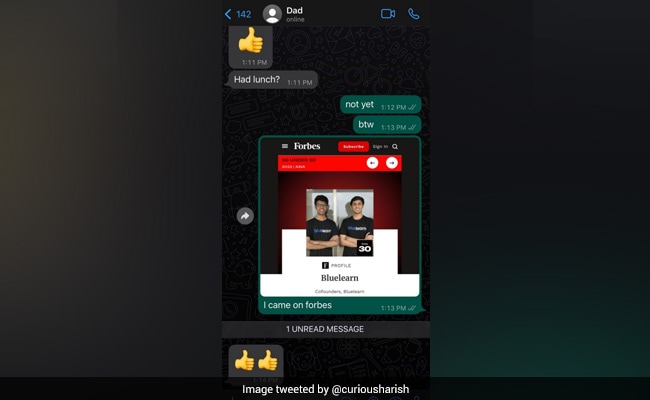 Man gets under thirty in Forbes and father responds with a thumbs up on WhatsApp.

When it comes to the big achievements of children, there are various ways parents react. Some are joyous, while others usually very guarded in their response.

A man who made it to the prestigious Forbes 'Under 30' list shared the reaction of his father which is winning the internet.

The man named Harish Uthayakumar shared a screenshot of a conversation with his father on Twitter.

It starts with Mr Uthayakumar's father asking him if he had lunch. The young man then shares his achievement that he has made it to the Forbes list, to which his father replies with a thumbs up emoji.

“Drop some thumbs up in the chat,” he asked Twitter users, posting the thumbs up emoji.

“What did you feel though after seeing your dad's message?” a user asked.

“I wanna meet your dad before I meet you!" said another.

"Once Again, Congratulations,” a third user commented, while others can be seen congratulating him for his achievement.