"This is the cutest emergency we've ever had!! Randy, the bearded dragon, tried to visit SpongeBob Square Pants and ended up in the ER. 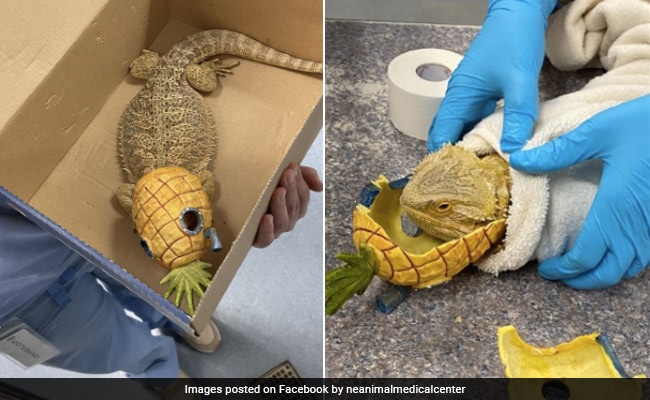 A video is going viral on social media where a bearded pet dragon accidently stuck his head in a SpongeBob SquarePants toy.

New England Animal Medical Centre has shared a post on Facebook on Wednesday which shows the creature hold in a box by a veterinarian.

“This is the cutest emergency we've ever had!! Randy, the bearded dragon, tried to visit SpongeBob Square Pants yesterday and ended up in the ER. We're not laughing at you Randy; we are laughing with you. The pineapple didn't make it, but Randy is back home happily laying in the sun,” the animal centre said in the caption.

The post has received over 3,200 likes on Facebook since it has been posted and numerous comments from the users.

“I have a bearded dragon names Tonka. They have such unique personalities. They get into trouble from curiosity good thing he is not a cat. Glad randy the dragon is ok,” said a user.

“That is the most beautiful design on this creature I've ever seen,” a second user commented.

“Your curiosity got you in trouble Randy!!” another user commented.

The Medical Centre later shared another post on Thursday when they took out the toy from Randy's head and said, “For everyone that wanted to see Randy's "after" photo...here he is. Looking as handsome as ever! Even without the pineapple, he's still our cutest patient ever.”