Read inOther Languages
This Article is From Jun 15, 2020

How Sushant Singh Rajput And His Telescope "Shattered Bollywood Stereotypes"

"His house was filled with thick non-fiction books... an advanced telescope could be found in his balcony," Dr Karan Jani wrote. 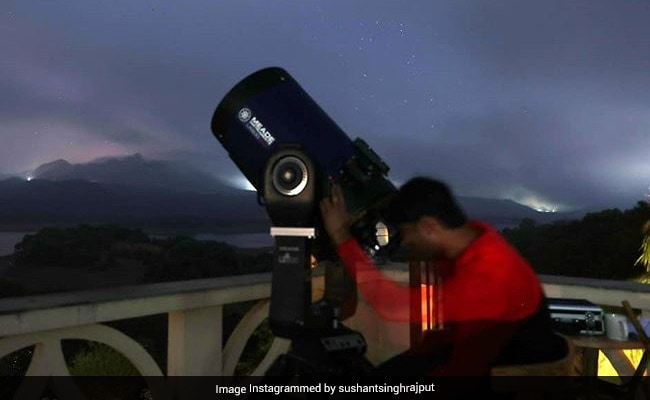 Sushant Singh Rajput had a telescope and an interest in astronomy, Dr Karan Jani wrote.

US-based astrophysicist and scientist Dr Karan Jani has introduced fans to a little-known side of Sushant Singh Rajput. He was an astronomy enthusiast and an avid reader, Dr Jani wrote in a moving tribute to the actor who was found dead at his Mumbai residence on Sunday. Police say he died by suicide. "I had the rare privilege to witness the other side of Sushant - that of a profoundly curious human being who had an impressive reading habit," Dr Jani wrote in a Twitter post shared last night. He said the sight of his bookshelf, filled with thick non-fiction books, was enough to shatter stereotypes about Bollywood celebrities and their reading habits.

Dr Jani said that even Mr Rajput's social media bio - "Photon in a double-slit" - hinted at this duality. He was a "Bollywood star with millions of follower" but also an "honest seeker finding a meaning in this universe", Dr Jani wrote.

One of the more talented stars of Bollywood, Mr Rajput's loss is a profound one for the film industry. The lyrics of David Bowie's 1969 song 'Space Oddity' encapsulate the loss beautifully when they say that the stars look very different today.

In his post, Dr Karan Jani - part of the Nobel Prize-winning gravitational wave experiment LIGO - revealed that Sushant Singh Rajput kept an advanced telescope in his balcony and dreamed of visiting the LIGO Observatories in the US.

"His house was filled with thick non-fiction books... an advanced telescope could be found in his balcony," Dr Jani wrote, adding that Mr Rajput carried the telescope to Chambal during the shoot of Sonchiriya so he could better observe nebulae.

Mr Rajput had given fans a glimpse of his bookshelf and the telescope in a 2018 video for Asian Paints.

In his tribute, Dr Jani recalled the conversations he had with Sushant Singh Rajput, which ranged from string theory to Sartre. "Our last conversation ended on a note that we will meet in a future spacetime cone," he wrote in conclusion. "We will indeed. Farewell my brave friend."

As someone who was studying to be an engineer before dropping out to pursue acting, Mr Rajput was perfectly qualified to talk about astrophysics, string theory and the rings of Saturn. Other members of the film industry have also spoken about his interest in these subjects.

"I'll never forget our conversations about astrophysics at sunrise," Priyanka Chopra wrote in a touching tribute to the actor on Sunday. Director Abhishek Kapoor, who worked with Mr Rajput in Kai Po Che! and Kedarnath, also said he was a "huge science buff consumed by what lay beyond in the universe".