"Mrs Neetu and Mr Rishi Kapoor cordially invite you for the Sagan ceremony of their son Ranbir with Aliya," reads the fake invite 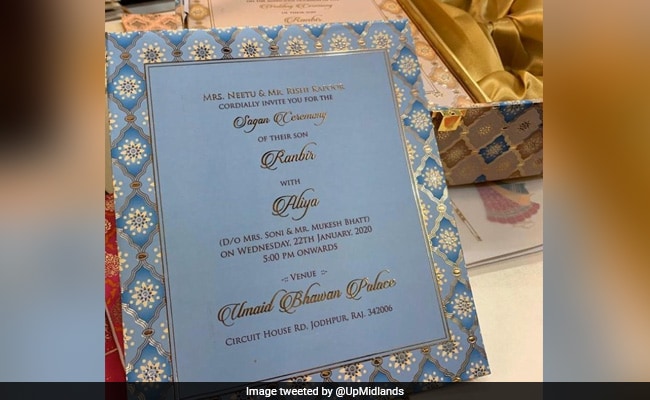 A fake wedding card of B-Town lovebirds Alia Bhatt and Ranbir Kapoor has started circulating on social media, unleashing fan frenzy over another possible wedding in Bollywood. Look closely at the card, however, and you realise it was probably created by a fan. It is full of typos and incorrect information.

Take a look at Alia Bhatt and Ranbir Kapoor's fake wedding card below:

Firstly, Alia Bhatt's name is spelt incorrectly in the card. It reads 'Aliya' instead of 'Alia'. Secondly, Mukesh Bhatt is Alia's uncle. She is the daughter of Mahesh Bhatt. Also, the card has typos like 22th as the wedding date, instead of 22nd.

Twitterati started making fun of the wedding card as soon as it appeared online.

A user wrote: "This wedding card circulating online is *FAKE* @aliaa08's name is not spelt as 'Aliya' n neither is her father's name Mukesh Bhatt, that's her uncle. She is @MaheshNBhatt's daughter. Pls don't believe in this n stop circulating this picture."

Another user commented: "It sucks when you're about to have a multi million dollar wedding but can't fix the typos in your wedding card. It's the 22nd not 22th."

Meanwhile, Alia Bhatt has denied rumours that she is tying the knot on January 22. Quizzed by paparazzi at Mumbai airport, she stopped and smiled, and added: "What do I say?!" After a pause, she said: "No".

On the work front, Ranbir and Alia will be seen together in Ayan Mukerji's Brahmastra, which is expected to release next year. The film also stars Amitabh Bachchan.