Helicopter, Armed Police Called To Capture Tiger. It Turned Out To Be...

"Today 10 armed police and a helicopter were called to her house after walkers reported a tiger in the woods." 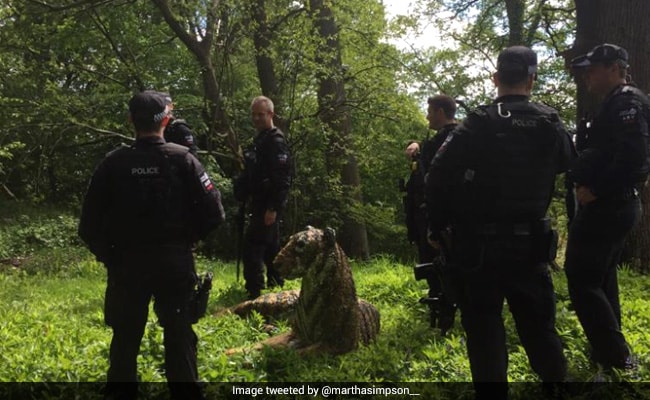 Police officers with a 'tiger' in Kent, UK.

A helicopter with armed policemen descended in an area of Kent, UK, on Saturday morning after walkers reported seeing a tiger loose in the woods. Officers responded to the scene "following a report from a member of the public that a large wild cat had been seen in the area", reports BBC.

What they found at the site instead has left social media users in splits. Instead of a real, live tigers, officers were greeted by the sight of a life-size sculpture.

According to Ladbible, Juliet Simpson, 85, had created the tiger out of mesh and resin two decades ago. When she was told by a neighbour that cops were investigating a tiger sighting, she set off from her home to the woods where her sculpture is located.

"Out of the field opposite came a whole crowd of armed police, who by then knew that it was all a false alarm and I said 'would they like to be introduced to my real live tiger?'" Ms Simpson told BBC.

"It looks quite real, it's meant to look real and it is about 30 metres from the footpath so you can't see it very closely."

Ms Simpson's granddaughter shared photos of the resin tiger on Twitter while recounting the case of mistaken identity. "My Granny is a sculptress. Today 10 armed police and a helicopter were called to her house after walkers reported a tiger in the woods. This is the tiger," she wrote.

My Granny is a sculptress. Today 10 armed police and a helicopter were called to her house after walkers reported a tiger in the woods. This is the tiger. pic.twitter.com/Kn21npZPiS

The pics have left many in stitches, collecting over a thousand 'likes' on the microblogging platform.

"And we thought the helicopter was looking for an escaped convict!" wrote one person in the comments section. "Thanks for making me laugh," said another.

In a similar incident in 2018, police in Scotland's Aberdeenshire ended a 45-minute stand-off with a tiger after realising that it was a stuffed animal.

Watch: Cat Hides With A Herd Of Capybaras During Rain, Internet Says "Imposter"