'Ghostlike' Octopus Found In Pacific May Belong To New Species 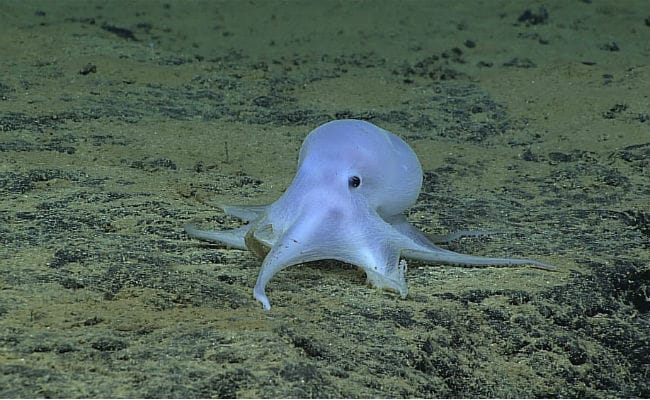 NEW YORK: An underwater research craft has spotted a "ghostlike" octopus that appears to belong to a previously unknown species at a depth of more than two miles (3 km) on the floor of the Pacific Ocean near Hawaii, US scientists say.

The milky white creature, nicknamed "Casper the Friendly Ghost" by Twitter users, was caught on cameras mounted on the craft at a depth of 4,290 meters, the National Oceanic and Atmospheric Administration said. Describing the animal as an incirrate octopod, one of two main groupings of octopods, NOAA said it was the first time an incirrate was spotted so deep in the ocean.

"This animal was particularly unusual because it lacked the pigment cells, called chromatophores, typical of most cephalopods, and it did not seem very muscular," said Michael Vecchione, a research zoologist at NOAA's National Marine Fisheries Service. Cephalopods belong to a biological class that includes octopuses, squid and cuttlefish.

The octopod "almost certainly" was one of a species never previously described by scientists, and it may well belong to a genus that has yet to be identified, Vecchione wrote on the NOAA's website. He could not be reached immediately for further comment.

NOAA has posted a video on the website showing a pale, rounded form with expressionless eyes and languid tentacles resting on the ocean floor. Its appearance led some Twitter users to say it resembled the cartoon character Casper the Friendly Ghost.

Last week's discovery came during the first dive of the 2016 season from the Okeanos Explorer, a ship operated by NOAA that explores little-known parts of the oceans.

The remotely operated underwater vehicle Deep Discoverer came across the octopod near Necker Island, or Mokumanamana, on the northwestern end of the Hawaiian Archipelago.
© Thomson Reuters 2016