Elephants Stuck In Mud For 2 Days Rescued, "Happy Ending" Gets Thumbs Up From Internet

The rescuers said that this is a common situation during the drought period when elephant's search for water becomes a death trap. 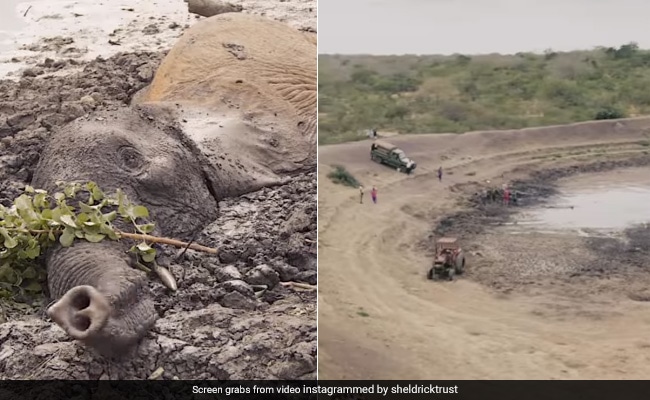 A wildlife trust launched a massive rescue operation to save the two elephants.

Internet is full of videos that show good samaritans helping out stranded animals and helping them join their flocks and herds. The latest in this series shows the rescue of two female elephants that were stuck in the mud in Kenya. The video was shared by Sheldrick Wildlide Trust on its Instagram handle three days ago. The caption said that these tuskers were stuck at the spot near a waterhole for at least two days till the rescuers found them.

"For these two females, a simple drink turned into a death trap," the trust said in its post, adding that it is a common situation during drought.

"In their quest for water, elephants venture into drying dams and become stuck in the mud. Confronted with slick floors and sticky terrain, they are unable to propel themselves to standing. Without help, it becomes a lethal situation," the caption further said.

They then talked about the "happy ending" where both the elephants were rescued. The wildlife trust also thanked all the rescuers who were involved in the operation.

The heartwarming video moved the internet, with many Instagram users commending the hard work of the rescuers.

"I am so thankful for the work you do. You are angels on earth!" one user commented. "Brings tears to my eyes, thank you," said another.

A third user commented, "Dedication and persistence. Dont give up when everybody else thinks it is over."

On Wednesday, a video from Chhattisgarh showed a month-old elephant calf being reunited with its herd. The baby elephant had wandered away from its group and was discovered alone in the fields of Jashpur.