Eat With Pythons, Pet Iguanas At This Cambodian Reptile Cafe

Some visitors look hesitantly at the cages, others are bolder in their embrace of the creatures. 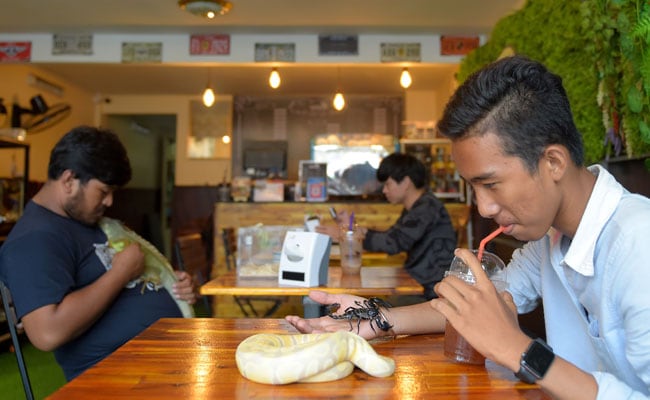 A customer with a ball python and a scorpion at the reptile cafe. (AFP)

For anyone terrified of an albino python, an orange corn snake or a scaly, bearded iguana, Chea Raty says getting up close and personal at Phnom Penh's first reptile-themed cafe is the only remedy.

Taking off from the cat cafes already popular in the Cambodian capital, Chea Raty launched his business to revamp the skin-crawling reputation of lizards and snakes and convince haters that they are simply misunderstood.

As customers sip on their lattes and hang out with the reptiles, "they will love them like I do," the 32-year-old told AFP while stroking the scaly neck wattle of an iguana.

The walls of his cafe are lined with lit-up glass tanks containing snakes of various lengths and colours, while a bright macaw screeches in the corner.

Some visitors look hesitantly at the cages, others are bolder in their embrace of the creatures.

There's no entry fee, so visitors can order a coffee and request a sit-down with a serpentine friend from one of the tanks.

An ice tea for a young customer instantly becomes a cool object for a yellow-and-cream-coloured ball python to twist its body around.

A woman giggles as an albino python creeps from her shoulder and wraps behind her head. 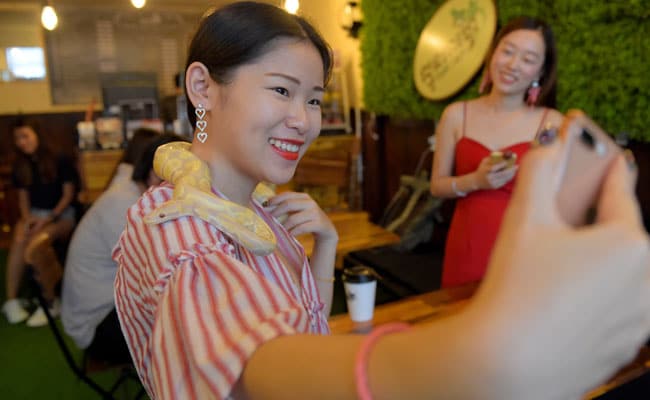 Nearby, a bearded dragon iguana perches on a table while a man gently pets it.

Customer Y Navim was wary at first of a corn snake, an orange-coloured serpent that kills its prey through constriction. But it was soon resting on her palm as she sipped her coffee.

"This cafe is quite unique," the 22-year-old said. "I've never seen some of these reptiles before. They are beautiful and scary."

To critics who say the animals should be left alone in the wild, Chea Raty says his human-bred creatures "cannot survive there."

All of his cafe creatures are imported from Thailand.

Business is still slow-going due to the common fears of snakes and lizards.

But women, Chea Raty says, are providing an unexpected boost.

"They put the pythons around their neck, take selfies, and they are happy."