Driver Gets Car Stuck In Wet Cement, Pics End Up On Twitter 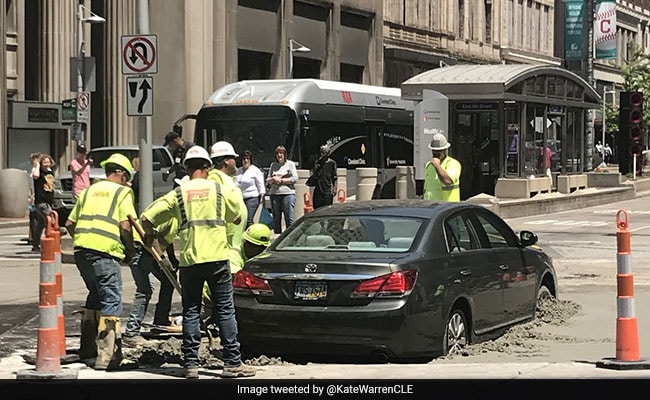 The construction crew was successful in freeing the car.

Having a bad day? Well, you'll be happy to know it's probably not as bad as this driver in the United States' Cleveland who drove their car straight into wet cement. Pictures posted online show the driver's tough predicament. And they'll definitely make you glad you weren't in this situation.

Twitter user Kate Warren tweeted the pictures on May 24. "This ding dong wasn't paying attention and drove right into fresh concrete on Euclid," she tweeted along with the face palm emoji. The images show construction workers working to free the vehicle from the wet cement.

Thankfully, the construction crew was successful in freeing the car according to several media reports.

Meanwhile, Ms Warren's tweet has collected quite a few reactions on the micro-blogging site. Since being posted her tweet has received over 1,000 'likes' and more than 300 retweets.

Promoted
Listen to the latest songs, only on JioSaavn.com
This isn't the first time a car landed up where it shouldn't have. Earlier in January, a car was photographed stuck in a dentist's office on the second floor in Southern California. Pictures taken by the local fire department showed the white sedan, titled towards one side, wedged halfway through the building with its rear hanging in the air.

Last year, an SUV was found dangling from two trees in China. The vehicle had lost control on a curve and drove off an expressway and landed in the bizarre spot. Earlier in 2017, a driver in China managed to drive his car right into the middle of a river. His reason to do so - the car's navigation system led him that way.Click for more trending news