Car Flies Into Air, Gets Stuck In Dentist's Office On Second Floor

Images taken by the local fire department show the white sedan partially wedged into the building, its rear exposed as it tilted to one side. 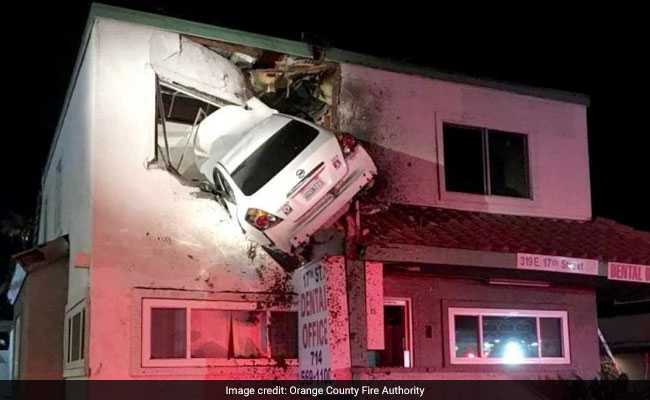 A car hit a divider, went airborne and crashed into the second floor of an office building in California

The phrase "crashing into a building" took on a new meaning Sunday when a car in Southern California hit a center divider, went airborne and plowed into the second floor of a dentist's office.

Images taken by the local fire department show the white sedan partially wedged into the building, its rear exposed as it tilted to one side.

Capt. Stephen Horner, a spokesman for the Orange County Fire Authority, said officials received a call about a crash in Santa Ana, California, at about 5:30 a.m. The car was traveling at a high speed when it hit the concrete median. Horner said the driver was not driving parallel to the divider; instead it was coming from a side street and slammed into the median, much like a T-bone crash.

The impact sent the car into the air and into the small office building. Horner said a small fire was immediately extinguished.

Two people were in the car. One managed to get out, while the other one was trapped inside for more than an hour as authorities used a heavy piece of equipment to stabilize the vehicle, Horner said. Both were taken to a hospital with minor injuries.

Horner said he does not have any more information on the occupants, but Santa Ana police said the driver admitted to having used narcotics.

Promoted
Listen to the latest songs, only on JioSaavn.com
Fire officials used a crane to pull the vehicle out of the building and bring it down, Horner said. The second floor, which is a storage space for files, suffered minor damage, he said.