This plot twist will make you laugh out loud. 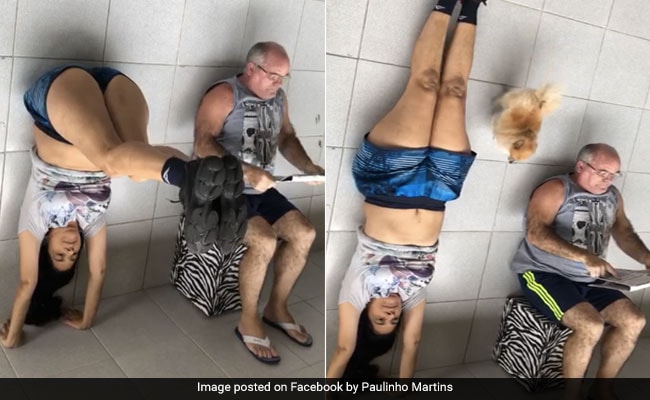 When a dog ruined its owner's fake workout...

A video of a dog unwittingly exposing his owner's fake workout has left social media users in splits. In the video going massively viral online, a woman is seen faking a headstand by pretending to stand, with head down, against a wall. It appears as if she is performing a headstand. Next to her sits a man on a chair, busy reading his newspaper. What viewers initially don't realise, however, is that the woman is not performing a handstand at all. Instead, the two people are actually lying on the floor - successfully tricking people into thinking that a tough workout is in progress.

The woman might have gotten away with it too - were it not for her dog, who hilariously foils the plan by walking in happily at an inopportune moment.

"Everything was going well, until the dog ruined everything," wrote Facebook user Paulinho Martins while sharing the video on the social media platform last Tuesday.

Since being shared online, the video has collected a whopping 5.4 million views along with more than 2 lakh 'shares' and 10,000 amused comments.

"Every dog has its day," another quipped.

Meanwhile, this is not the only funny video that is currently going viral online. A video of a dog leaping over a nearly four-foot-high gate has left many astonished.