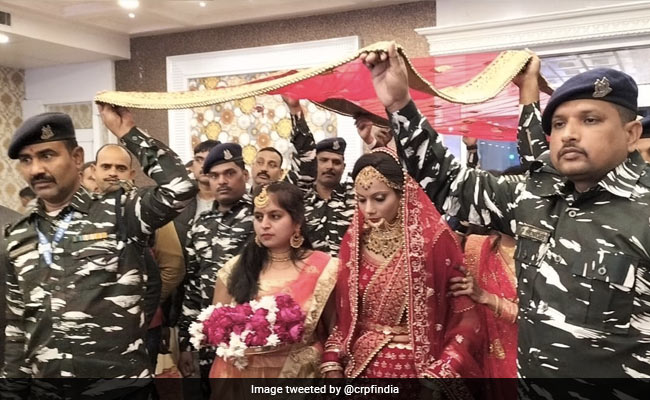 A group of CRPF jawans on Monday attended the wedding of the sister of Constable Shailendra Pratap Singh, who was killed in a terrorist attack in Pulwama last year. He had been posted with the 110th battalion of the Central Reserve Police Force when he was killed in the line of duty.

According to India Today, Constable Singh's colleagues arrived at his sister Jyoti's wedding in Uttar Pradesh and carried out the duties that are normally entrusted to the bride's brothers.

Photos shared by the CRPF on Twitter show that the 'men in uniform' walked the bride to the mandap - a task that is normally carried out by brothers. "As elder brothers, CRPF personnel attended the wedding ceremony of Ct Shailendra Pratap Singh's sister," the tweet read. "Ct Shailendra Pratap Singh of 110 Bn CRPF made supreme sacrifice on 05/10/20 while valiantly retaliating terrorist attack in Pulwama," it added.

CRPF jawans reportedly blessed the bride and presented her with gifts at the wedding.

"My son is no longer in this world but now we have so many sons in the form of CRPF soldiers who always stand by us in times of happiness and sorrow," Shailendra Pratap Singh's father said.

In October last year, terrorists opened fire at CRPF personnel while they were on duty on a highway on the outskirts of Srinagar. At least two CRPF soldiers were killed and five injured in the attack. The terrorists attacked when the CRPF troops, along with Jammu and Kashmir Police, were carrying out road opening operations at Pampore bypass on October 5.

"Troops of 110 Battalion CRPF along with JKP were carrying out ROP during which unknown terrorists (12:50 hours) fired upon the troops. In this incident total 05 CRPF personnel sustained injuries and were evacuated to district hospital," CRPF's statement read.