Over 5 million views for this video - and counting. 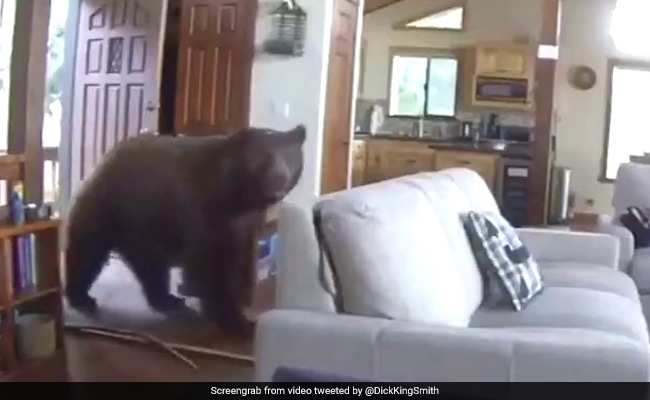 A bear was seen breaking and entering into a house.

Hair-raising CCTV footage shows the moment a bear barged into a home after banging the front door open. The terrifying footage emerged on Twitter a few days ago, and has since collected millions of views and stunned comments. While it is not clear where the video was filmed, the Daily Mail reports that there have been a number of instances of bear breaking and entering into homes in North America this summer.

The video shows the front door of the house being flung open before a paw appears in the corner to hold it open. Then, the huge, brown-coloured bear enters the cabin, looking around to survey its surroundings while making its way inside calmly. Luckily, the house appeared to be empty during the invasion.

Ohio-based radio presenter Jason Priestas and author Dick King-Smith were among those who shared the video on Twitter.

While this version of the clip has garnered over 3.4 million views, the other, shared by Mr Priestas, has also gone viral with over 2.3 million views.

The footage has also prompted a number of amazed comments on social media, including Reddit where it was also shared.

"He kicked down that door likes he's done this before," one person wrote.

"I love that the bear uses its paw to stop the door from swinging back," another remarked.

"My sister used to live in Churchill, Manitoba. The doors were made of steel so the polar bears couldn't get in. It looked as if this brown bear just gave the door a hearty push to enter. Yikes," a third commenter shared.

Last year,  black bear broke into a Colorado house and later escaped by smashing a hole through the wall.