"She apparently feels a bit guilty and slightly embarrassed about letting down the image of her cousins bouncing across the Alpine snows," the rescuers said. 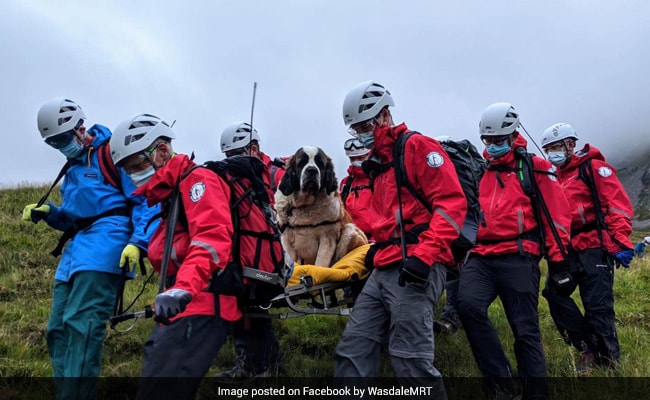 Daisy the St Bernard was carried down the hill in a stretcher.

Sixteen rescuers were called out to save a St Bernard dog stranded on an English mountain, in an embarrassing episode for the member of a breed more famed for rescuing stricken humans from the icy dangers of the high Alps.

The pooch named Daisy collapsed while descending from the summit of Scafell Pike in northwest England with her owners, Wasdale Mountain Rescue team according to a statement on their website Sunday.

After showing signs of pain in her legs, she sat down and refused to get up, it said, and with nightfall fast approaching, local police called in the rescuers for help.

Upon reaching the stricken pooch, the team "carefully introduced themselves to Daisy... and with the help of a treat or two members were able to assess her condition and administer analgesia for the pain."

Manoeuvering the 55-kilogramme (120-pound) pooch onto a stretcher in order to carry her off the hill required "plenty" of treats, they added.

"From there on, apart from the odd little adjustment, the evacuation was found to be not that much different to a normal adult evacuation."

Video from the five-hour evacuation showed the team fording a river and hauling the stretcher over a fence.

After the team reached the bottom of the hill, a relieved Daisy got back on her feet and even managed a slight, sheepish wag of her tail.

"She apparently feels a bit guilty and slightly embarrassed about letting down the image of her cousins bouncing across the Alpine snows," the rescuers said.

First bred as pathfinders and rescue dogs by monks living in the St. Bernard Pass between Switzerland and Italy, St Bernard dogs have been credited with rescuing hundreds of people over the centuries.