The man was also seen driving carelessly and performing wheelies on his bike on a busy road, risking not just his life but that of other motorists. 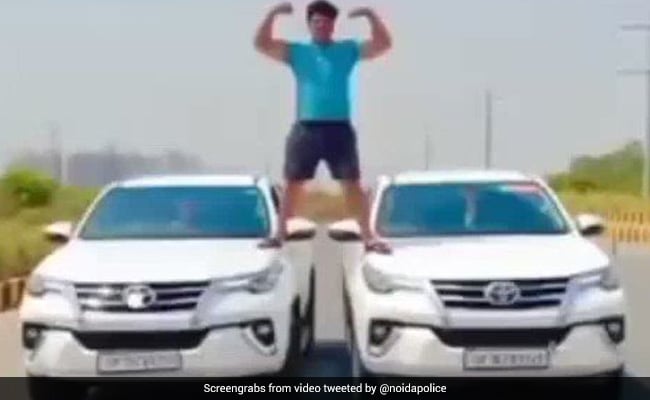 The police have seized vehicles that were used in the stunt.

Five minutes of fame proved a pricey bargain for a 21-year-old man from Uttar Pradesh's Noida who was arrested by the police for performing dangerous stunts for his social media followers.

In one of his videos that was shared widely, the man, identified as Rajiv, was trying to imitate Ajay Devgn's famous entry scene atop two SUVs from the movie 'Golmaal' which itself was a recreation of a stunt from the movie 'Phool Aur Kaante'.

Rajiv was also seen driving carelessly and performing wheelies on his bike on a busy road, risking not just his life but that of other motorists. The police said that they have taken a preventive action against the man.

"Based on the video, the man was traced. He has been identified as Rajiv (21), a resident of Sorakha village and has been arrested. The two SUVs and a motorcycle which was used in making the video have been impounded," SHO of Sector 113 police station Sharad Kant said.

"One of the Toyota Fortuners and the motorcycle belong to Rajiv's family. He had taken the other Fortuner from a relative for the video. He is not employed but belongs to a well-to-do family. He was making the video for social media only,"

A case has been registered under the Motor Vehicles Act. Meanwhile, Gautam Buddh Nagar Police Commissioner Alok Singh lauded the local police for the prompt action and urged parents and guardians of children and youth to pay attention.

His advice comes in the wake of several videos and short clips emerging on social media where young boys and girls are seen performing stunts.

Two years ago, a police sub-inspector in Madhya Pradesh performed a similar Ajay Devgn-like stunt atop two Honda City cars in uniform, with a video of the event going viral on social media. The police officer was later suspended from service and a fine was also imposed on him.