"Sad Those 14 People Died": Cop Who Saved At Least 8 Others From Mumbai Fire

Kamala Mills Fire: Constable Shinde got a message on the wireless and he reached the spot in 5 minutes.

Mumbai: After a massive fire gripped a rooftop pub in Kamala Mills complex late on Thursday and swallowed 14 lives, a Mumbai cop managed to pull as many as eight of over 200 people out of the flames. A photograph of Constable Sudarshan Shivaji Shinde carrying a woman on his shoulders has since gone viral. Mumbai Police commissioner Dattatray Padsalgikar and mayor Vishwanath Mahadeshwar on Monday praised him for his efforts.

"It's nice to be acknowledged on the first day of the year, but I am sad that those 14 people couldn't be saved," he said.

The blaze at the rooftop pub started during a party at 1 Above restaurant and spread rapidly to Mojo's Bistro next door. Among those killed were 11 women, including Khushboo Mehta, who was celebrating her 29th birthday with her friends. Most of the bodies were found piled up near a women's restroom. It was a stampede-like situation, eyewitnesses, mostly in their 20s and 30s, said. The doctors confirmed all the victims died of suffocation. Firemen found that there were no extinguishers and exit route. 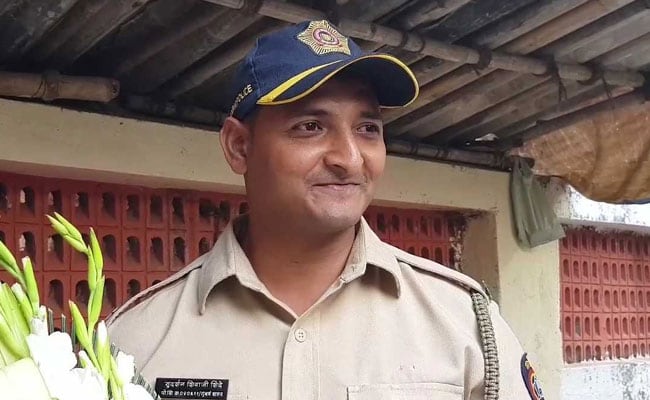 Sudarshan Shivaji Shinde is happy that he was able to save lives, but sad that those 14 people died.

As the fire engines struggled to douse the flames that erupted around 12.30 am, Constable Shinde got a message on the wireless. He along with his colleagues rushed to the spot and saw what he wasn't expecting to see. "There were many ambulances, fire engines and police cars. People were screaming and crying for help. Their loved ones were trapped. A huge fire on the terrace was visible from a distance. I saw that the firemen were using the exit stairs to go to the terrace and decided to join them," he told NDTV.

But once there, he couldn't see much as the whole area was filled with thick, black smoke. It was a challenge to breathe or to keep his eyes open. But he couldn't have gone back. "The fire team broke open the exit door and tried to control the fire. We spotted a few women near the washroom and tried to bring them down one by one. As there were no stretchers, we had to carry them on our shoulders," Mr Shinde added.

Even as the photograph shows only him in action, he clarifies, there were others, including the firemen, who helped pull victims out of danger. "I saw my photograph that has gone viral but there are other photographs that show people being carried on stretchers. It was teamwork," he said, adding, "We are public servants and we have to serve the people and ensure that they stay safe."

Promoted
Listen to the latest songs, only on JioSaavn.com
Just like him, Mahesh and Suraj Giri, who were in the next building, are believed to have saved over 50 people. Both work in the server room of a television station in the complex.