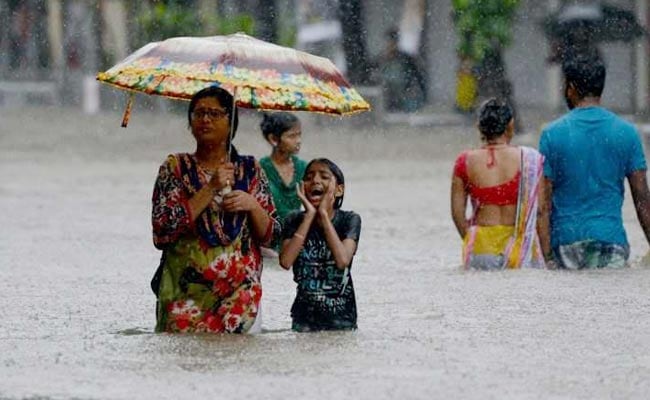 Mumbai found itself thigh-deep in water as heavy rains lashed the city. (AFP)

Mumbai: Mumbai has been witnessing what weather officials believe could be the heaviest and longest bout of rain since July 26, 2005, when the city was paralysed by floods. It has been raining incessantly since morning leading to yet another incident of flooding, traffic jams and long hours on the city roads. Over 5 NDRF teams have been deployed for rescue and relief operations, while other 5 teams are en route.

As per the Regional meteriological centre, Mumbai, the city will experience intermittent rain with heavy to very heavy rain fall in a few places in the city and suburbs over the next 24 hours.

Here are the live updates from Mumbai:

1st trn started bet CCG-Virar, evacuation of all stranded psngrs is priority & trns will be run throughout the night ,if reqd.@RailMinIndia

Mumbai Weather: City Gets 9 Times Usual Rain, Every Minute A Struggle
Mumbai is bracing for what weather officials believe could be the heaviest and longest bout of rain since July 26, 2005, when the city was paralysed by floods. It has been raining incessantly since morning and if it continues till high tide in the evening, the India's commercial capital could be in for hours of flooding, traffic jams and stranded cars on the roads."
Aug 30, 2017 00:04 (IST)
Two people were killed in a landslide in Vikhroli's Surya Nagar, said news agency ANI. This comes after two cases of drowning were reported in Thane.
Aug 29, 2017 23:51 (IST)
'Government Staff Can Stay Home Tomorrow If Heavy Rains Persist'

Maharashtra Chief Secretary has said that government employees can stay home if heavy rains persist in Mumbai on Wednesday. Mr Mallick also issued an advisory on the same after discussing the situation with higher authorities.

Navy Provides Shelter To Mumbaikars Stranded After Heavy Rains
The Western Naval Command today said it has made arrangements to provide shelter to Mumbaikars who were left stranded after heavy rains lashed the metropolis."
Aug 29, 2017 23:26 (IST)
One person was killed and two have been injured after a building collapsed in Vikhroli's Varsha, says news agency ANI.
Aug 29, 2017 23:16 (IST)
Two Drown In Rainwater-Filled Drains In Thane
A 32-year-old woman and a teenage girl have died while two others have been injured in rain-related incidents, news agency PTI reported. The woman fell into a 'nullah' filled with rainwater in Kalwa and drowned, officials in the Disaster Management Cell of the Thane Municipal Corporation or TMC said. In the second incident, 14-year-old Gauri Jailwar died after falling into a swollen drain near a mall.
Aug 29, 2017 23:12 (IST)
OYO Rooms Offers Free Shelter To Those Stuck In Rain

Stuck in Mumbai? We are offering free shelter at select hotels, call us on 9313931393 & we'll guide you to the nearest shelter #MumbaiRains

Aug 29, 2017 22:42 (IST)
Traffic is clear on the Western Highway from airport upto Dahisar and so is the Eastern Freeway. If someone is stuck on the road, kindly dial 100 or contact the Mumbai Police on Twitter for assistance.

#Mumbai We're running free Shuttle services to get you safely to your destination from these locations https://t.co/sHfGSoNAl5#MumbaiRains

Mumbai Rain: Mumbai In Rain Trauma, Abandon Cars If You Must, Advises Police
By 12 pm, Mumbai was being urged to stay at home and step out only in case of an emergency after non-stop rain poured down through the morning, disrupting the city's crucial trains and causing massive jams. The met department said about four inches of rain was recorded in just a few hours. Heavy rain is forecast for the next 48 hours.
Aug 29, 2017 22:11 (IST)
Political parties have engaged in a slugfest over handling of the situation and advisories for citizens in Mumbai. While Maharashtra Chief Minister Devendra Fadnavis advised offices to let employees leave early and issued similar orders for government staffers, Yuva Sena chief Aaditya Thackeray said there was no need to evacuate offices.
Aug 29, 2017 21:46 (IST)
Bombay Stock Exchange or BSE to remain open tomorrow. All the market segments will also function normally.
Aug 29, 2017 21:44 (IST)

Five more teams of NDRF are enrout to Mumbai as a precautionary measure in addition to Five teams already deployed there. 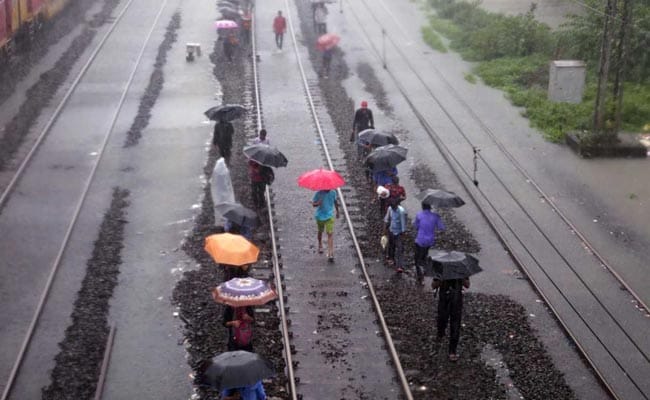 Aug 29, 2017 21:21 (IST)
A total of 10 flights have been cancelled from Mumbai airport, 7 flights diverted and 23 flights asked to go-around till now.
Aug 29, 2017 21:19 (IST)
Vehicles coming from Goa and Pune have been advised not to enter Mumbai today as a precautionary measure to avoid a grid-locked situation.
Aug 29, 2017 21:09 (IST)
Mumbai advised to remain home tomorrow by Chief Minister Devendra Fadnavis

In the wake of warnings issued by #IMD people in Mumbai and areas around #Mumbai are advised to stay back home unless there is an emergency.

However, the essential services and critical staff in the Government will be on duty tomorrow. #MumbaiRains 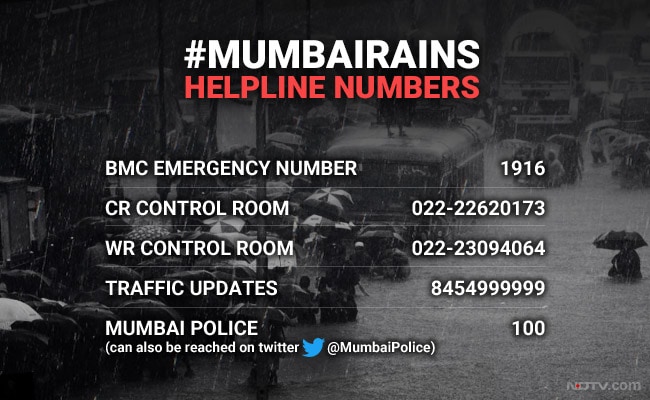 Foreign Media On How Heaviest Rain In 12 Years Stopped Mumbai
Mumbai's heaviest rainfall since 2005 paralyzed the metropolis as transport ground to a halt and trading in bond and stock markets were affected."
Aug 29, 2017 20:01 (IST)

#9Wupdate On account of torrential rains in #Mumbai, we'll waive off penalties for date/ flight change, refund & no-show on confirmed (1/2)

(2/2) tickets for travel to/ from #Mumbai on 29th Aug. In case of date/flight change, only the fare difference, if any, will be applicable.

If you are stuck on the road , kindly dial 100 or contact us on Twitter. We will assist you #MumbaiRains

Mumbai Weather: Airport Operations In Mumbai Resume, Sea-Link Open - 10 Points
Mumbai's residents were advised to stay home if they could as the city was lashed today by what the weatherman said could be the heaviest rain in 12 years. With high tide at 4:40 pm, the city police have urged people to avoid beaches and promenades. There is thigh-high water in many parts of the city, vehicles are half submerged, with people abandoning cars to walk. Local train services have been paralysed with tracks flooded. Airport operations resumed but flights are delayed and there are big traffic jams all over the city. The state government has asked offices to allow employees to leave early. The situation in the city is being compared to July 2005, when the city was paralysed by floods."
Aug 29, 2017 18:53 (IST)

The airport is operational however we request you to confirm with your respective airline for your flight status before starting off.

The citizens who make us proud of policing this city! Always forthcoming to help the known & unknown in a crisis #MumbaiRains#SaluteMumbaipic.twitter.com/Ccq2m5aKKc 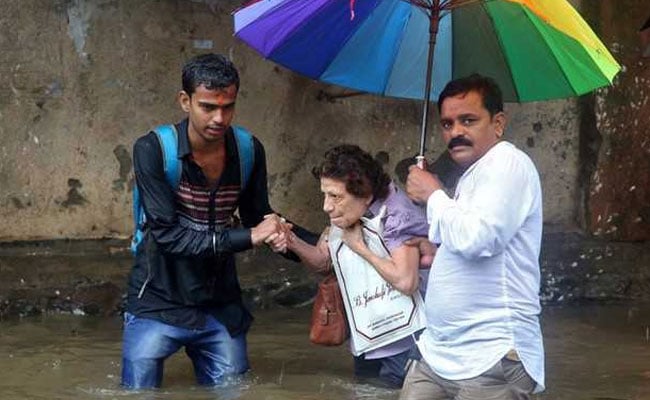 Had a telephonic conversation with Maharashtra CM Shri @Dev_Fadnavis regarding the situation due to heavy rains in Mumbai and nearby areas.

I also assured the Maharashtra CM of all possible help from the Centre. The NDRF teams have already reached Mumbai for rescue & relief ops.

Water logging has been cleared and Traffic has started moving on Bandra Worli sea link both north and south bound. Aug 29, 2017 18:07 (IST)
PM Modi Speaks to Devendra Fadnavis, Assures All Possible Help From Centre
As Mumbai continued to battle incessant rains, Prime Minister Narendra Modi called up Chief Minister Devendra Fadnavis to assure all possible help from the Centre and urged the people of Mumbai and surrounding areas to be safe. He asked them to take all essential precautions in the wake of heavy rain.

Centre assures all possible support to the Government of Maharashtra in mitigating the situation due to heavy rains in parts of the state.

Mumbaikars, be safe & lend a helping hand to those in distress! We got through this before & we'll get through it again! #mumbairainspic.twitter.com/mWxCstJmlS

Mumbai Rain: High Tide Could Make Things Worse, Heavy Rain Due For 48 Hours
The Mumbai Police, which has been tweeting updates as the city dissolves in chaos after heavy rain, has asked people to "avoid waterfronts, sitting on tetrapods or on promenades" with a high tide of 3.32 metres expected at 4:40 pm. It has also asked Mumbaikars to cooperate with policemen on duty."
Aug 29, 2017 16:47 (IST)

If you're offering your space for people stuck in #MumbaiRains please tweet with the #RainHosts tag. Doc autoupdates https://t.co/wEnh1O4xVA

If D water on D roads is heading up to the level of your tyres, please abandon the car. Being on your 2 feet may be uncomfortable but safer

Mumbai Weather: City Gets 9 Times Usual Rain, Every Minute A Struggle
Mumbai is bracing for what weather officials believe could be the heaviest and longest bout of rain since July 26, 2005, when the city was paralysed by floods. It has been raining incessantly since morning and if it continues till high tide in the evening, the India's commercial capital could be in for hours of flooding, traffic jams and stranded cars on the roads."
Aug 29, 2017 16:23 (IST)

Mumbai experiencing the heaviest downpour since 2005.
Advising all to stay indoors and stay safe. #MumbaiRains Aug 29, 2017 15:08 (IST)
Citizens find themselves swimming through roads as floods rise in Mumbai 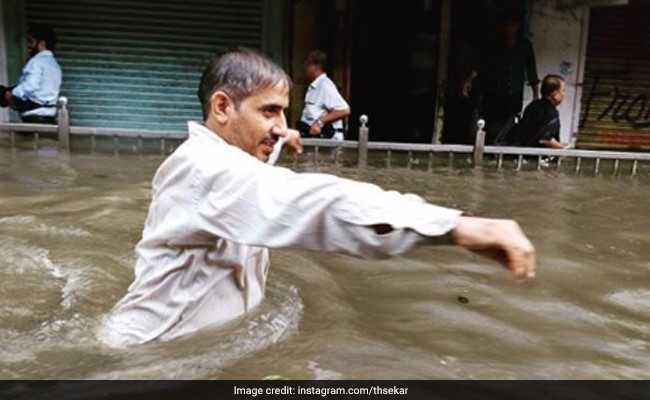 Traffic on Bandra - Worli Sea Link towards South Mumbai has been closed for some time for clearing Traffic ahead. Plan accordingly.

#MumbaiRains DO NOT DRIVE in Water. If your Vehicle Engine stops do not try to restart.Keep Phones Charged.Use SMS. Move to higher places. pic.twitter.com/QbS2Y4Zs3Z

If you are stuck on the road , kindly dial 100 or contact us on Twitter. We will assist you #MumbaiRains 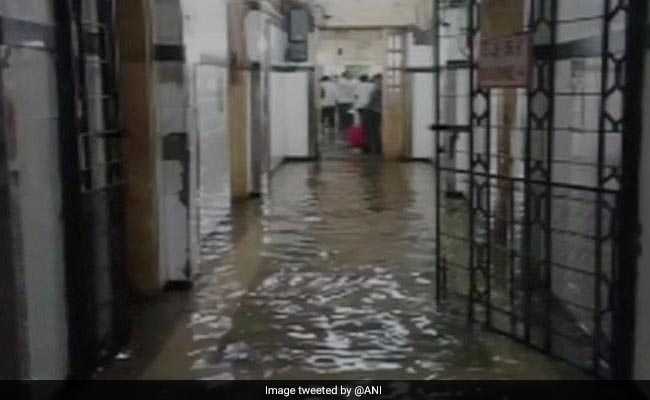 Aug 29, 2017 14:02 (IST)
Waterlogging is causing delays on the Western line of Mumbai railways. A passenger waiting at the Bandra station says he has been waiting for an hour, without any information being provided on delays.
Aug 29, 2017 13:54 (IST)
Sudhir Naik, Mumbai's Deputy Municipal Commissioner urged citizens to step out of their homes only if it is very important.
Aug 29, 2017 13:37 (IST)

Typhoon-like weather.Cancelling my flight to Delhi for an Indo Australian meeting.Telling my Aussie friends I'm 'Down Under' water in Mumbai pic.twitter.com/1LBZJBr1Um