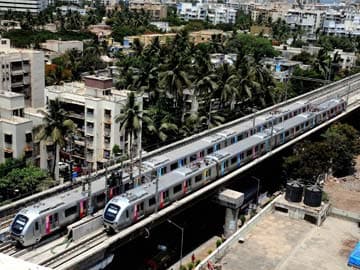 Mumbai: Commuters on the Mumbai metro will have to pay more (Rs 10-40, depending on the distance) starting July 9, the Bombay High Court ruled today.

The 11.4-km metro line linking the suburb of Versova in the west to Ghatkopar in the east was inaugurated on June 8.

Reliance Infra, owned by Anil Ambani, which leads the consortium that built and runs the metro, has said the introductory offer fares of Rs 10 will be discontinued next month. It says the project cost much more than what was budgeted, and it has the right to charge passengers more to recover some of those costs.

The state government disagreed and went to court.

Judges today said they will not stop the new fares from being introduced till a committee that includes representatives of all stake-holders and the union government reaches a decision.

Promoted
Listen to the latest songs, only on JioSaavn.com
Apart from the metro, the prices of journeys on Mumbai's local trains will double tomorrow, a consequence of the new train fares cleared by the Centre at the end of last week. A group of MPs from the BJP and the Shiv Sena met Railways Minister DV Sadananda Gowda to urge him to cancel the hike.

Maharashtra is expected to vote in October for its next state government, and the BJP-Sena alliance is hoping to make a comeback after 15 years in opposition. The national election last month saw the combo scooping 42 of the state's 48 seats, building hope that voters will express the same preference in the state election and evict the incumbent coalition of the Congress and Sharad Pawar's NCP.