Have you seen the rioters who vandalised the Amar Jawan memorial? 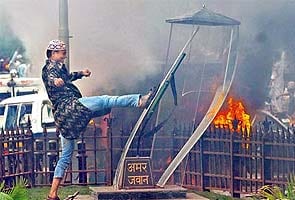 Mumbai: The Mumbai police is now using MiD DAY lensman Atul Kamble's photographs in its massive hunt for protestors who damaged the memorial at Azad Maidan dedicated to sepoys martyred in the 1857 mutiny.

The men you see in these photographs struck at the heart of the nation's pride during the riots on Saturday, when they vandalised the iconic Amar Jawan Jyoti memorial near CST. Mumbai police, having drawn flak for its massive failure to contain the riots on Saturday, is now going on an overdrive to nab the miscreants.

According to reports, the entire force and its network is hot on the heels of these unidentified protestors, who kicked at the memorial, smashed it with a lathi, and then damaged the rifle and helmet inside the fibre glass casing.

The memorial, which was unveiled in 2009, was erected in memory of two sepoys - Sayyed Hussein and Mangal Cadiya - who were martyred during the Sepoy Mutiny of 1857.

These disturbing images were captured on Saturday by MiD DAY's senior photographer Atul Kamble. Incidentally, Kamble became a victim of police violence while doing his job, even as the vandals went scot-free after sullying the iconic symbol of national pride.

Paradoxically, these photographs shot by Kamble have now become invaluable tools in the hands of the cops as they hunt for the vandals.

Crime Branch officials are now relying heavily on these shots, which are the only existing leads that can help trace these men. They will also act as evidence if and when the protestors are arrested.

Mumbai Crime Branch and local police are racing against each other to nab these hoodlums, knowing whoever makes these crucial arrests will reap rich professional rewards.

"Of all the miscreants, these men are the most wanted. They have hurt the sentiments of the entire nation. They must be arrested on priority," said a senior Crime Branch official, on condition of anonymity.

An officer from Azad Maidan police station said, "In such a scenario, it is better if these men surrender before the police reach them. By giving themselves up, they would be able to avoid the wrath of the police as well as the public."

"These photographs have been circulated among our informers. We are in constant touch with them for leads. Every policeman is on the lookout for them at present. If we manage to arrest them before Independence Day, it will be our tribute to the freedom fighters," he added.

Promoted
Listen to the latest songs, only on JioSaavn.com
The photographs caused a furore in social media networks. Readers across the nation condemned the act, some even comparing the vandals to 26/11 militant Ajmal Qasab.