The Kerala lottery results will be released on the official website of the Directorate at keralalotteries.com. 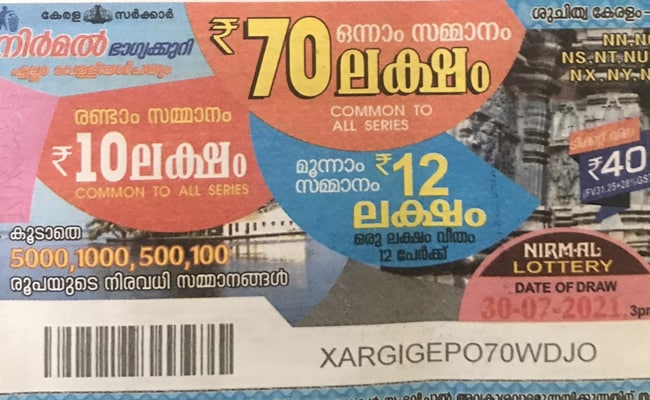 Kerala lottery results will be released on the official website at keralalotteries.com.

The Directorate of Kerala State Lotteries will release the Nirmal Lottery results today. The Kerala lottery results will be released on the official website of the Directorate at keralalotteries.com. A first prize of Rs 70 lakh will be awarded for a ticket from all series. Kerala State Lotteries publish tickets in NN, NO, NP, NR, NS, NT, NU, NV, NW, NX, NY and NZ series.

Draw for Kerala lottery results are held at 3.00 PM at Gorkhy Bhawan, Thiruvananthapuram and the cumulative results lists are released online at 4.30 PM.

Nirmal lottery results are also released for a second prize of Rs 10 which is common to all series.

You will find a result link (a pdf file) here and may check your results there.

Apart from Nirmal, Kerala Lotteries, a financial enterprises working under the state finance ministry, run draws for other state-run lotteries like Karunya Plus, Akshaya, Sthree Sakthi, Karunya and WIN WIN.

The draw for this monthly lottery by the Directorate of Kerala State Lotteries was held at Thiruvananthapuram and was broadcast on Malayalam television stations.

The Bhagyamithra lottery results released online after 4.30 pm at keralalotteries.com, the official website of the Kerala State Lotteries.

This lottery carries a first prize of Rs 5 crore, which will be distributed among five ticket holders.

Bhagyamithra lottery tickets are sold for Rs 100 across the state and the sales will be stopped before the draw.